My Article on the Portable Antiquities Scheme 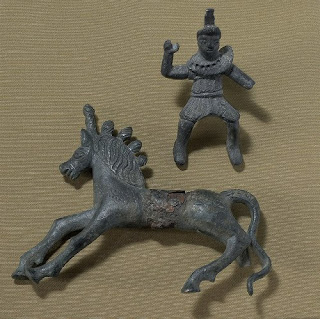 I've posted on SSRN my article from the August edition of the International Journal of Cultural Property, A Coordinated Legal and Policy Approach to Undiscovered Antiquities: Adapting the Cultural Heritage Policy of England and Wales to Other Nations of Origin 15 Int'l. J. Cult. Prop. 347 (2008). Here's the abstract:

Blanket ownership laws, export restrictions, and the criminal law of market nations are the default legal strategies currently used by nations of origin to prevent the looting of archaeological sites. Although they have been remarkably successful at achieving the return of looted objects, they may not be the best strategies to maximize the recording and preservation of archaeological context. In England and Wales a more permissive legal regime broadly applied and adopted by the public at large has produced dramatically better results than the strong prescriptive regime of Scotland, which can be easily ignored.

This article attempts to clear up any misconceptions of the cultural policy framework in England and Wales. It accounts for the legal position accorded undiscovered portable antiquities, and describes how this legal framework is perfected by a voluntary program called the Portable Antiquities Scheme (PAS). This approach stands in stark contrast to Scotland, which has used a legal strategy adopted by most other nations of origin.

The domestic legal framework for portable antiquities in England and Wales is unique and differs from the typical approach. Coupled with the PAS, this legal structure has resulted in a better cultural policy, which leads to less looting of important archaeological sites, allows for a tailored cultural policy, and has produced more data and contextual information with which to conduct historical and archaeological research on an unprecedented scale. Compensating finders of antiquities may even preclude an illicit market in antiquities so long as this compensation is substantially similar to the market price of the object and effectively excludes looters from this reward system. Although the precise number of found versus looted objects that appear on the market is open to much speculation, an effective recording system is essential to ensure that individuals who find objects are encouraged to report them.

I wanted to write what I hope is a thoughtful piece which describes in an objective way what the PAS does, and how it creates a pragmatic compromise. Many of the very best heritage scholars are still seemingly under a misimpression about what it does and does not do. It's not a perfect system, but it has produced some dramatic results, and may change the way we conceptualize heritage and context. I hope those interested in the scheme and archaeology will do me and the employees of the PAS the courtesy of reading the piece before dismissing my position. Sadly I'm afraid some already have reacted, without even reading the piece.

I have no doubt that some of my assertions may prove controversial, and I'm happy to have a vigorous debate, but I think everyone interested in heritage issues needs to work harder to make sure they are leaving room for meaningful discourse and disagreement and that we're respectful of differing views and positions.

Pictured here are a horse and rider found in Cambridgeshire which appeared in the 2007 PAS annual report, via the PAS flickr page.
Posted by Unknown at 10:55 AM

I found your article interesting. I particularly agree there should at least be some investigation into whether something akin to the Treasure Act and Portable Antiquities Scheme (PAS) can be adapted to conditions in other countries. Overall, I don't think the costs for the program are all that great given its obvious merits and broad scope. Surely, rich EU countries like Cyprus, Greece and Italy have the funds available to experiment with such a scheme. It is more a matter of having the will to do so. Empowering interested members of the public can only provide archaeologists with valuable allies for purposes of protecting and recording the past. For a report on a talk given by the administrator of the Treasure Act and PAS see: http://www.accg.us/issues/news/bland/