Accounts of Looting at El-Hibeh in Egypt 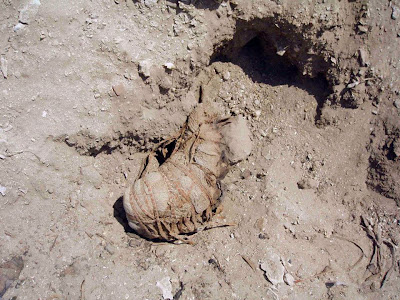 "Looting is ongoing, there is no protection for the site"
-Carol Redmount, archaeologist

Marco Werman of PRI talks with archaeologist Carol Redmount about ongoing looting at El-Hibeh in Egypt. In the interview which is embedded below Redmount notes that a criminal enterprise which has "mafia-like" characteristics is systematically looting the site. The leader of the operation is allegedly an escaped prisoner. No security is protecting the site.

I recommend clicking through to see a slideshow of discarded human remains and looted graves. Site protection is the first and probably most important step which can be taken here. Protections at Egypt's points of export and importing checkpoints cannot undo the damage being done here. The looters themselves are motivated by a vulnerable resource and economic hardship. You can follow this site on a facebook site Redmount has created to track the situation and offer assistance.

When I returned to Cairo from our dig house last week and our van passed the site heading for the eastern desert highway, we saw about ten men openly looting the mound and desert behind (we have pictures of some of them), with conveniently parked motorcycles nearby. One of our drivers took the same road this past Friday and reported that again numerous men were busy with wholesale looting of the site in broad daylight. This is an on-going crisis. They are destroying the site. The SCA officials have tried everything they could to get the looting to stop. Nothing seems to be having any effect. This is something police and security seem to be ignoring, turning a blind eye to, or worse. We started the Save Hibeh facebook page because we are at our wits end as to what else to do . . .


The solution is for Egypt's authorities to raise the level of security at this site and sites like it, or to enlist the assistance of other agencies from UNESCO or Italy's Carabinieri. We can all collectively pressure Egypt from afar to take these steps, but a nation controls the protection of its own heritage.

Our next-best option is to stop buying the shabtis and kinds of salable objects that come from sites like this without complete histories, adequately documented.

We can make at least one more connection between the drug trade and art theft. A number of stolen artworks have been recovered near Manchester. The investigation was primarily aimed at the sale of illegal narcotics, the paintings were ancillary to that investigation. The theft of the paintings in 2007 was a troubling example of a violent art theft:

A man posing as a postman knocked on the Aird family's door in Cheadle Hulme. When Louise Aird, who was carrying the couple's two-year-old daughter Sabrina in her arms, opened the door, she was confronted by Miller brandishing a 10-inch knife. Three other men followed him into the house. "They tied me up with a cable and had a knife in my back," Aird, 46, said. "They said they would slit my throat. Then they said they would kill the baby if we moved, that's what they kept saying. They took everything out of the bottom half of the house."

The four men stole 14 pieces of art. In 2009 one of the thieves was jailed, while three remain at large. The two arrests in connection with this drug raid do not appear to have a connection to the theft itself. Rather the arrested men acquired the paintings through the black market. Though these works are well known and could not have been sold on the open market, these paintings do have value on the black market as leverage. The connections between other criminal activity and art theft are often discussed, but seldom shown in such sharp contrast as we see in this case. Interesting that the defendants thought the police were investigating them for the art, when it was a drug investigation instead that led to the recovery.
Posted by Unknown at 8:00 AM No comments:

I have posted on SSRN a working paper "Justice and the Cultural Heritage Movement: Using Environmental Justice to Appraise Art and Antiquities Disputes" which attempts to make connections between the environment and culture.

The environmental justice movement has been an important grassroots effort which allows minority and underpriviliged communities to challenge environmental harms. It has its roots in Houston. I use as a starting point the cultural harm which has taken place here in Houston to a neighborhood called the Fourth Ward, at one time referred to as the "Harlem of the South", which has fallen victim to cultural loss and over-development. In the piece I work to make broader observations about culture, the environment, and justice, focusing specifically on antiquities law and policy. It is my hope that by using justice we can begin to move beyond the source/market entrenchment and craft real solutions. I would of course welcome any comments or criticisms (derek.fincham 'at' gmail.com).

Posted by Unknown at 5:00 AM No comments:

Jason Felch reports on the Chasing Aphrodite blog that Turkey is actively seeking 18 objects from the Met. Earlier this month Martin Bailey reported that Turkey would stop lending objects to the United States and United Kingdom, and this dispute with the Met may be one of the motivators for that cultural embargo. This seems a curious collection of objects for return, one that does not share many characteristics with the other kinds of objects requested by nations of origin in recent years. The objects were part of the Norbert Schimmel Collection. Schimmel was a former Met trustee and the collection itself was published in a 1974 volume edited by none other than outspoken looting critic Oscar White Muscarella.

I sometimes call these kinds of requests for return realkulturpolitik, in that there does not appear to be a direct legal mechanism for the return of these objects at this late date. In order to pursue a legal claim here Turkey would have to justify its reasons for not bringing a claim in 1974. Reasons for that delay may be new evidence  which has come to light which shows that these objects were illegally removed from their context or from Turkey. Yet we do not yet know of any of the specifics justifying the return. And if a legal claim was brought for these objects, Turkey would have to show the Met is not prejudiced by the delay under a laches defense. This could prove difficult. After all, Schimmel and others who would have acquired these objects are deceased and cannot provide evidence about how these objects were acquired.

And from the Met's perspective, we do not yet have any of the histories of these objects before their acquisition by Schimmel. The absence of detailed information foreclosing their potential looting or acquisition of these objects makes them questionable objects perhaps, but does not give Turkey a legal right to them. The law requires Turkey to establish that they came from Turkey, which might be difficult. Schimmel appears to have acquired these objects before 1974, at a time when the heritage community was first beginning to pay attention to the looting of sites, after the 1970 UNESCO Convention.

What Turkey does have though is a potential ethical claim which the Met may respond to. And if the Met does not, Turkey is imposing a damaging cultural embargo, and pressure will likely mount on the Met to justify their continued possession of these objects.
Posted by Unknown at 5:52 PM 1 comment:

Vanja Stojanovic, a terrific student at the University of Guelph put together this short interview after the ARTHattack! conference where I talk a bit about ARCA, the current situation in Greece and the art market:
Posted by Unknown at 10:13 AM 1 comment:

I want to give a big thank-you to the folks at the University of Guelph and Dr. Susan Douglas. Last Friday I was fortunate to have been asked to give a keynote address to the  ARTHattack! symposium at the University of Guelph. I've attended my share of conferences, and I can certainly say this was one of the very best, well run, with terrific papers. This year the topics included:

And these were all undergraduates! They set a very high standard.

Earlier this week I also got to sit in on Dr. Susan Douglas' seminar course examining art crimes. There were some very thoughtful conversations, and a lot of interesting ideas to cover from the broad perspective of art history. Too often the cultural heritage debates are boiled down to museums v. archaeologists or source v. market.

But art history gives us a number of useful tools for examining forged art, to take one example. How can art historians create an aura for objects with good histories, or modern recreations of ancient art? Grappling with these issues offers a fresh perspective, and it was refreshing to think about the wonderful tools art historians can bring in examining the abstract ideas connecting this material with culture. Thank you!
Posted by Unknown at 2:39 PM No comments:

German art forger Wolfgang Beltracchi was sentenced to six years in prison for counterfeiting 14 paintings by Fernand Leger, Max Ernst and Heinrich Campendonk. But there may be many more forgeries:

Beltracchi and three accomplices were sentenced after just nine days at the Cologne District Court, with the defendants receiving shorter sentences in exchange for full confessions. But in a SPIEGEL interview the 61-year-old has now admitted to creating phoney works by "about 50" different artists. Speaking to the media for the first time since he was sentenced, Beltracchi refused to name the exact number of paintings he forged throughout his career, which he began in the 1970s by creating "unpainted works by old masters, and later Jugendstil and Expressionists" and selling them at flea markets. But during the interview with SPIEGEL, Beltracchi said that due to high demand, he could have easily put "1,000 or 2,000" forgeries on the art market.

Email ThisBlogThis!Share to TwitterShare to FacebookShare to Pinterest
Labels: Forgery

The Art Newspaper reports that Turkey has refused to lend objects to museums in the US and UK until issues over disputed objects are resolved.

The British Museum had asked for 35 items for the exhibition “Hajj: Journey to the Heart of Islam” (until 15 April). Although Turkish museums were agreeable to the loans, the ministry of culture blocked them, leaving the British Museum to find alternative artefacts at short notice. As part of the growing Turkish campaign, loans have been blocked to museums with disputed objects in their collections. The Met has confirmed that a dozen antiquities are now being claimed by Turkey, but would not identify the individual items. A museum spokeswoman says: “The matter is under discussion with the Turkish authorities.” This month, the Met is due to open “Byzantium and Islam” (14 March-8 July). Many loans are coming from the Benaki Museum in Athens, with none requested of Turkish museums.

Posted by Unknown at 2:36 PM No comments: