Interesting Development from the Museum of Fine Arts 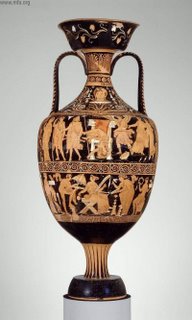 The Museum of Fine Arts in Boston has returned 13 artifacts to Italy, including this amphora depicting the murder of Atreus. The return gets notice in the New York Times as well. This is another in a long line of high-profile efforts by Italy to seek the return of its objects. The MFA press release points out how the museum has been at the forefront of providing provenance information of their works. Curious, I searched for a Degas painting and picked this landscape, and indeed a surprisingly detailed set of provenance information was detailed. I also looked up a Cezanne, and this work, titled Turn in the Road also had a great deal of provenance information.

This is quite a fascinating development, and one that has not manifested itself in the literature yet. Ideally, more museums will devote some resources to this kind of endeavor. It would seem to serve a number of good purposes: it may make it easier to track down the work if it one day is stolen, it may limit the potential market for the work, and it allows anyone with internet access to view the work. Last but not lease, it effectively eviscerate a lot of the criticism involving museum and the high profile return of works including MOMA and the Getty. Throwing open the doors, so to speak, and heading off criticism at the pass is a shrewd and welcome move, and seems to be a fairly recent trend.

Posted by Unknown at 6:11 AM No comments:

From Buddha to The Scream

In today's news, see this BBC piece in which Indian authorities alerted Interpol of the theft of 18 bronze Buddha statues dating from the 9th and 10th centuries from a museum in Bihar, India. A piece from India enews reveals that apparently, some of the monks are frustrated with security lapses by State authorities. Also, the statues had been slated for an exhibition in France next month, which hardly seems a coincidence. Response to the theft has been predictable, with the usual cries of "the Mafia did it" echoing throughout most of the stories. It will be interesting to see how this plays out. What exactly Interpol may be able to do about it remains to be seen. Notionally, India hopes that customs and border officials should be on the look out for the statues. Another interesting question is what kind of market there might be for these statues. We'll return to these issues time and again, but if these pieces are so wildly publicized, it seems hard to imagine what kind of market there is for them.

However, thieves continue stealing versions of Edvard Munch's The Scream. Speculation exists that thefts of this kind are instigated by what we can call theft on demand, or the Thomas Crown purchaser (Pierce Brosnan, not Steve McQueen). Thieves may steal a work for a wealthy individual, who pays handsomely to have the privilege of having such a rare work on their wall.

Alternatively, some Argue that these expensive thefts are used as collateral in Mafia deals. However, without more proof, claims of that kind seem like wild speculation. Incidentally, the Munch works recently recovered are going on display briefly before their restoration. Whether the Buddha statues will be recovered like the Munch paintings remains to be seen, and may ultimately depend on the publicity devoted to their disappearance, which seems one of the likely keys to the return of the Munch paintings. Though the scream is an iconic image, there are actually 3 versions, and much of the publicity surrounding the work seems to stem from the fact that the various versions keep getting stolen.
Posted by Unknown at 8:40 AM No comments: