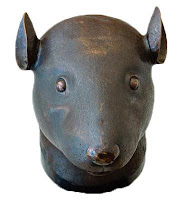 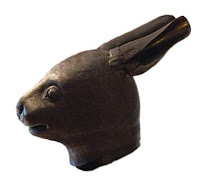 Both China Daily and CCTV have reported on China's efforts to seek the return of two bronze animal heads, which were stolen from Beijing's Old Summer Palace in 1860 by an Anglo-French coalition during the Second Opium War. They were created in the 18th century. I learned with great interest that it was Lord Elgin who ordered the burning of the Summer Palace -- perhaps to discourage Chinese forces from kidnapping and as recompense for mistreating prisoners. Students of history will know his father was Thomas Bruce, the 7th Lord of Elgin who removed the Parthenon frescoes from Greece.
Charles George Gordon, a 27-year-old captain in the Royal Engineers wrote:


We went out, and, after pillaging it, burned the whole place, destroying in a vandal-like manner most valuable property which [could] not be replaced for four millions. We got upward of £48 apiece prize money…I have done well. The [local] people are very civil, but I think the grandees hate us, as they must after what we did the Palace. You can scarcely imagine the beauty and magnificence of the places we burnt. It made one’s heart sore to burn them; in fact, these places were so large, and we were so pressed for time, that we could not plunder them carefully. Quantities of gold ornaments were burnt, considered as brass. It was wretchedly demoralising work for an army.

These heads, one of a rabbit and one of a mouse were two of 12 sculptures which were taken. Five others are still missing. Christies has announced these objects will be on sale next February in the Yves Saint Laurent and Pierre Berge Collection auction in Paris. At least some of the proceeds from the sale will be used for AIDS prevention. The two items are expected to fetch at least 8 million Euros. Any legaly claim for these sculptures will have long-since expired, despite the less-than-noble way in which they were looted.


The China's Lost Cultural Relics Recovery Fund, a privately funded organization has indicated it may try to purchase these objects and return them to China. In 2003 and 2004 the organization attempted to buy back these objects, but the asking price was $10 million. As the spokesperson told Daily China, "At that time, we bought back the pig's head for less than $1 million. We think the offered prices are unreasonable and unacceptable." China, an emerging economic power is in a unique position among nations of origin, as it can often use its considerable economic clout to buy back objects which were removed from the country during the imperial age.
Posted by Unknown at 8:05 AM