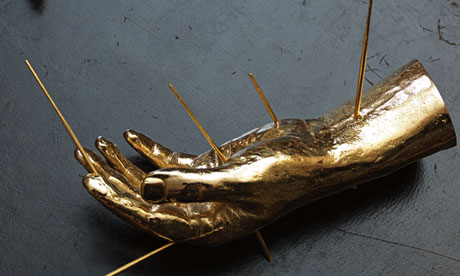 Auction houses are often in the news for the fantastic sums their works achieve, or for protesting they didn't know this or that work was looted or stolen. It's not often they are the victims of theft. This work by Turner prize-winner Douglas Gordon has been stolen from Christie's auction house. There are fears it is likely going to be melted down for its scrap value. Given the work is solid gold, that scrap value is considerable, likely £250,000. Apparently Christie's was not forthcoming about details of the theft to the artist, who was also the sculpture's owner:

He said Christie's only told him about the disappearance of the sculpture after he had spoken about the theft elsewhere. Gordon, who owns the work, said: "It is like someone borrowing your car, and then you finding out from a neighbour that it has been crashed," he said. "It looks like I am the last person in the chain to know." Gordon said he had first heard of the theft second-hand, from a curator, last week; a Christie's representative contacted him on the morning of 29 November, 16 days after the crime was reported to the police. Scotland Yard confirmed it was "investigating the alleged theft of a piece of artwork from a secure warehouse in the King Street area of Westminster. The incident was first reported to police on 12 November". A Christies's spokesman said: "This matter is under investigation and we are in contact with all parties involved. We cannot comment further." A source at the auction house said Gordon's gallery had been informed right away, and that a Christie's representative had attempted to contact the artist on 28 November. The theft from Christie's storage facility – which claims on its website "world-class security, management and expertise" – is likely to cause significant reputational damage for the auction house. A spokesman declined to comment on arrangements at the storage facility, citing the need to keep security measures confidential. A source said: "Given the sheer volume of works of art that come in, this as an extraordinarily rare thing to happen."


There are no reported details about the theft from the storage facility.

Posted by Unknown at 4:55 PM No comments:

Last week the Montreal Museum of Fine Arts returned a Toi Moko to the Museum of New Zealand Te Papa Tongarewa in Wellington. The Toi Moko is a tatooed and mummified Maori head. This repatriation is the latest in a series of repatriations the Maori have successfully achieved in the past two decades. There is a lot of hard work and negotiation involved in these returns, so the ultimate return is a welcome occasion. At the ceremony the head was not permitted to be filmed or photographed. The head was laid "under a sheer black cloth, it was wrapped in cellophane and packaged in a series of protective boxes for transport. All the while, a group of Maori chanted, prayed and sang during an emotional ceremony". The Globe and Mail, reporting on the ceremony reported:

In the 19th century, Europeans became enamoured with the heads and the Maori began using them almost like currency to trade for muskets and other coveted objects. While some were sold and traded, others were stolen because of their value as curiosity items. “Before, they were received as works of art. They were people and they are people,” said Michelle Hippolite, co-director of the Museum of New Zealand. “In our culture, remembering that they are people first is what is most important.” The head that ended up in Montreal was obtained by F. Cleveland Morgan in 1949 at the Berkeley Galleries in England, before being donated to the museum. The Maori estimate that they have retrieved about 320 of the 500 known remains around the world, located in 14 different countries. That doesn’t count private collections, but some collectors have come forward after hearing about the campaign to repatriate the heads.

Posted by Unknown at 4:28 PM No comments:

Susan Shearing, a Lecturer at the Australian Centre for Climate and Environmental Law at the University of Sydney has authored "Reforming Australia's National Heritage Law Framework" in Volume 8(2) of the Macquarie Journal of International and Comparative Environmental Law (2012). (PDF) From the abstract:


It is argued that while some useful initiatives have been adopted in response to the review of the Environment Protection and Biodiversity Conservation Act 1999, the overall response of the Government has been disappointing, focusing on refining procedural frameworks to facilitate a streamlined approach to heritage assessment and approvals rather than substantive reform to the EPBC Act. Further, there has been limited progress in reforming national laws dealing with indigenous heritage, movable heritage and historic shipwrecks.

Posted by Unknown at 1:12 PM No comments:

In February of this year armed men stole 80 small objects from a museum in Olympia dedicated to the Olympic games. They were armed, were able to overcome a lone security guard, and smashed the display cabinets and stole close to 80 small objects. At the time there was speculation by the Mayor of Olympia and others that Greek austerity measures had led to diminished security, making the theft easier to execute. After an undercover operation with an officer posing as a buyer, all of the objects have been recovered, most of them buried in a field only 3 km from the museum.

Given such a high-profile theft, in an olympic year, it is safe to assume that Greek authorities made recovering these stolen objects a high priority. A task which at the time was seemingly more difficult as there was speculation that these small, portable objects would have been easily shipped abroad or smuggled across the Adriatic to organized criminal networks in the Balkans. But it seems the objects did not make it far away from Olympia.

On Sunday authorities in Greece announced three Greek men were arrested in the city of Patra after an undercover officer posing as a potential buyer was offered one of the highlights of the theft, a Bronze Age gold ring. The remaining objects were found in a field near Olympia, where they had been buried inside a sack. So congratulations are in order for Greek law enforcement. And given the context of the theft, it is noteworthy that the Greek Public Order MInister Nikos Dendias told reporters on Sunday that "Despite the difficult economic situation we are not being lax on security issues, especially over our cultural heritage."

Here is some video of the press conference and the recovered objects from Al Jazeera:

I've been asked to forward on details of a call for papers for the 'Art, Culture and Heritage stream' for the upcoming Socio-Legal Studies Association 2013 conference in York March 28-30. The convenors are Janet Ulph and Charlotte Woodhead, details of the conference are here, and here are details for the call:

This stream seeks to bring together discourse on the interface between, art, culture, heritage and the law. To this end papers will be welcomed concerning the legal and non-legal regulation of art, culture and heritage as well as the rights which exist in respect of these. Furthermore, participants may wish to engage in debates concerning the role played by ethics in the context of preservation of the past and the need to curb the illicit trade in cultural objects. Papers may include, but are not limited to:

The proliferation of images in and of law lends itself to surprisingly complex problems of epistemology and power. Understanding through images is innate; most of us easily understand images without thinking. But arriving at mutually agreeable understandings of images is also difficult. Translating images into shared words leads to multiple problems inherent in translation and that pose problems for justice. Because images are inherently “what we know” (because they are “what we see”), insofar as most of us process our experiences first through sight, images do not naturally lend themselves to linguistic translation. We don’t believe they require translation because we are so sure of what we see, and yet comparing and sharing understandings of images requires communication through words. Despite our saturated imagistic culture, we have not established methods to pursue that translation process with confidence.


Other articles from the symposium are available here.
Posted by Unknown at 6:30 AM No comments:

Email ThisBlogThis!Share to TwitterShare to FacebookShare to Pinterest
Labels: Scholarship - Articles and Essays

Prosecutors have amended their complaint which seeks to forfeit this Koh Ker Khmer statue. Much of the press coverage focuses on whether the colonial French government or some other legal enactment created ownership rights in the statue before the time it was removed.  I don't have a pacer account and access to these court filings, but based on the reporting it appears prosecutors saw a difficult path to victory in attempting to apply colonial French law to the statue. Instead they are also seeking a more straightforward argument: arguing that the importers of the statue lied on their customs forms. From the NYT:


Prosecutors say that in 2010, when the statue was being imported into the United States, the owner submitted an inaccurate affidavit to American customs officials, at Sotheby’s request, stating the statue was “not cultural property” belonging to a religious site. The government contended in its filing on Friday that both parties knew the statue, a mythic Hindu warrior known as Duryodhanna, valued at up to $3 million, was stolen when they agreed to ship it from Belgium to New York. The government says it can prove that the statue in fact came from a Khmer Dynasty temple, Prasat Chen, part of a vast and ancient complex called Koh Ker.

If prosecutors can establish these statements were inaccurate, the more difficult question of which law might apply to the statue would be largely irrelevant. This is the same legal principle used when prosecutors successfully forfeited a 4th-century B.C. ancient golden phiale from Michael Steinhardt in 1999. Lying to customs officials is a violation of the law, with its own forfeiture provision. If the prosecutors can establish this, a successful forfeiture seems very likely.

Art theft with pistols, a long drive and a cemetary

Four works of art stolen from a museum in Pretoria South Africa appear to have been discarded hundreds of miles away near the coast in Port Elizabeth. On Sunday the thieves paid for their admission to the art museum and asked the curator to show them around the museum. Then, presumably after seeing what they liked they pulled out their pistols and stole five works of art. Today it seems four of the works have been recovered in a private cemetery 700 miles away. There must be an interesting story here, perhaps more details will emerge and that fifth painting will hopefully be recovered soon.
Posted by Unknown at 3:03 PM No comments:

An Update on Looting in Egypt


The number of illegal excavations and thefts has worsened to the point that groups are organizing heavy machinery to carry out extensive digs. “This wasn’t just someone taking their shovels and digging holes in the sand,” said Deborah Lehr, chairman of the Capitol Archaeological Institute at George Washington University, who has been charged with helping the Egyptian government protect its antiquities. “These were bulldozers, and gangs of men over a period of time.”

Posted by Unknown at 8:12 AM No comments: