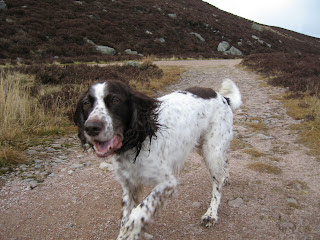 I am pleased to announce that my PhD thesis has been completed, successfully defended, corrected and printed. It's titled "Preventing and Repairing These Losses: The Legal Response of the United States and the United Kingdom to the Illicit Trade in Cultural Property". I think I should have perhaps chosen a more succinct title.

It feels great to be finished, and it was a lot of hard work with some tough decisions, but it wouldn't have been possible without a lot of help and support from my colleagues here in Aberdeen and Joni (aka "my funder"). I'm sorry to say much of that support was undermined by our French Spaniel and serial abuser pictured here.

I've included the table of contents below. I'm still not sure if I want to try and publish it, which would mean a lot more work, and I suppose part of that will depend on where I land in the coming months. I started this little blog as a way to stay productive, even when I couldn't quite get things going on the thesis. I've found it invaluable, and for anyone who writes I think a blog is a great way to keep in the habit of writing.

I'm not sure where we will end up at this point, I plan to continue research into cultural heritage issues, or at least a related field which will allow me to continue the work I've been doing. I had what I thought was a good shot at a couple of postdoctoral funding opportunities which would have allowed me to look in some real depth at repatriation, but unfortunately those fell through. On a happier note I am involved with a really exciting project with some people which will create a really great cultural heritage resource, which I'll talk about in much more depth here in the coming months.

Posting will likely be very light for the next few weeks, as we're heading back to the States to catch up with family and friends.

B. Source and Market Nations. 3

III. The Nature and Extent of the Illicit Trade. 6

B. Cultural Heritage or Cultural Property?. 16

I. Introduction: How to Prevent the Illicit Trade at Its Source?. 22

A. The Typical Approach: Guatemala. 24

3. What can a Source Nation do when an Object has been Exported?. 46

A. Domestic Regulation in the United States. 52

2. The Archaeological Resources Protection Act of 1979. 54

B. Domestic Regulation in the United Kingdom... 63

IV. Summary: What are the Key Components to Effective Domestic Regulation?. 78

A. Origins of the Protection of Cultural Property. 81

1. Defining Cultural Property in the Convention. 86

2. Shortcomings of the Convention. 87

3. Defining the Scope of Protection. 97

B. Impact of the Convention. 97

1. Implementation of the UNESCO Convention in the US. 100

A. The Perceived Bias in UNESCO Undermines its Efforts. 109

C. The 2001 UNESCO Convention For the Protection of the Underwater Cultural Heritage. 114

I. Introduction: The Problem When the Claims of Two Relative Innocents Collide. 117

II. Manifestations of the Conflict 120

B. When the Conflict Involves Statutes of Limitations. 123

E. The Consequences of the Choice of Law Challenge in Art and Antiquities Litigation. 131

A. What UNIDROIT Got Right 136

1. Compensation for the Diligent 136

IV. The General Choice of Law Inquiry and Alternatives. 141

Chapter 5: Market Regulation of Cultural Property in the UK.. 151

A. The Select Committee Inquiry. 152

B. The Illicit Trade Advisory Panel 153

III. UK Restrictions on the International Movement of Cultural Property. 156

IV. The Treatment of Cultural Property in the Law of England and Wales. 170

2. Reset and Criminal Activity Outside the UK.. 190

Chapter 6: Market Regulation of Cultural Property in the United States. 207

A. National Stolen Property Act Prosecutions under the McClain Doctrine. 209

A. The Substantive Claims. 233