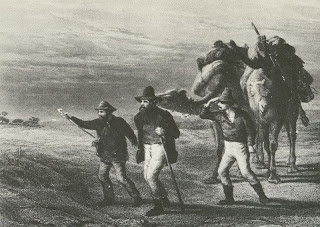 Will Anderson over at The Assemblage was kind enough to point out the decision by the South Australian government to possibly halt an auction. An Australian news outlet, ABC News Online is reporting that the South Australian Government is considering halting the auction of a breastplate recently discovered by two brothers. It was estimated to bring half a million dollars (aus.) at auction. The object may have been presented to Aborigines in 1863 who helped the explorers Burke and Wills. Wikipedia has a nice overview of that expedition here. Let's just say despite grand ambitions to cross the continent, it did not end well.

The Aboriginal Affairs Minister Jay Weatherill may attempt to acquire the brass plate under the Aboriginal Heritage Act 1988 (SA), which is available here. I'm not very familiar with it, but it seems the Minister may elect to purchase the object, or even seize it if a crime has been committed.

It's a bit of a curious action here in that it is protecting a gift which the newly-arrived explorers gave to the aborigines who helped them. Most protections of this kind would seem to protect the creations of the indigenous groups, and not gifts given to them by the new European explorers. It's a different way of thinking about an antiquity I think, and challenges what we might consider to be heritage.
Posted by Unknown at 4:33 AM

A quick perusal of the act reminds me of the Canadian Cultural Property Import & Export Act which can cover just about anything, if it is deemed important to Canadian heritage. It casts a very wide net that has even included contemporary work by international artists who had never been to Canada.

The debate in South Australia does indeed raise many questions, not least the method in which the breast-plate was acquired.

Three of these breast-plates were made in Melbourne by the Royal Society of Victoria in order to thank the Yandruwandha Aborigines of the desert areas at Coopers Creek for helping the explorers of the Burke and Wills Expedition. The two leaders, Burke and Wills died on the expedition, but a third man, John King, was cared for by the Yandruwandha for three months and survived. For many of the Yandruwandha, this would have been their first contact with white men and it is due to King that we know as much about the final days of the expedition as we do.

The expedition's organisers wanted to thank the Aborigines, (which in 1860 could be considered to have been an unusual move), and arranged for Alfred Howitt, a notable anthropologist, to take the breast-plates to Coopers Creek. Howitt presented the plates to the Yandruwandha and reported the fact back to Melbourne.

Now South Australia has two pieces of heritage legislation, the Heritage Places Act (1993) and the Aboriginal Heritage Act (1988). It is my understanding that the breast-plate, which was allegedly found in 2001 on crown land, would be covered by both Acts.

Consequently the Aboriginal Heritage Act does not restrict items it protects as purely those of indigenous origin, but to all artefacts "significant" to Aboriginal history. As this breast-plate was a unique gesture of appreciation, it represents a significant point in European-indigenous contact in Australia, and is therefore significant to both European traditions and Aboriginal traditions.

Minister Weatherill is still debating whether to register the breast-plate as an Aboriginal item despite substantial evidence that it was presented to the Yandruwandha in September 1862. Minister Weatherill would do well to consider the circumstances of the find, which raise many questions including the possibility that the item may have been taken from an indigenous burial site. Ownership of the item needs to be challenged and the private sale should be stopped if the state of South Australia is going to be seen as serious about protecting moveable cultural heritage.

I'd be interested to know more about the circumstances of the find.

The blurb on Bonhams website gives an elaborate description of why and how the breastplate was produced, but says very little about how it came to light. The article is titled 'Burke and Wills Relic Unearthed', and at the end it says:

"Consequently, this remarkable object lost in the desert sands has a rare symbolic power.
The owners are hopeful that their extraordinary find will go to a museum where the relic can be seen on display by the public."

So they are saying it was retrieved from the "desert sands". Accidentally? In a controlled archaeological excavation? Or in an illicit excavation?

I know next to nothing about portable antiquities law in South Australia, but presumably this kind of find has to be declared to the State, and surrendered if it is of significance as defined by the Aboriginal Heritage Act.

Certainly the breastplate fulfills both criteria, and will presumably be bought by the State, but the case does raise questions about having different laws for different categories of heritage. In the state of Victoria there are separate Acts and government departments dealing with indigenous and 'colonial' archaeology. I have to say that I have problems with that. Whilst I appreciate the different physical and symbolic qualities of Aboriginal and European heritage, it seems that these divisions cause problems when assessing 'significance'.

No one doubts that, say, Port Arthur in Tasmania and the Burrup Peninsula in Western Australia both have outstanding significance - but look how one gets the full heritage treatment, and the other is handed over to a resources company for destruction.

Dave, I think you are quite right to point out that we don't know how the breast-plate was recently discovered. I doubt very seriously that this object was unearthed by any archaeologist in a professional excavation. Most likely it was either found or illicitly excavated. If I had to guess I would say it was illicitly excavated; most likely with the use of a metal detector. That is just speculation of course. It seems a bit curious that after the object was given to the aborigines, contact seems to have been lost with them and we don't know exactly what they did with it. A professional excavation of the object certainly would have shed some light on this.

It certainly does not seem like the kind of object that should be auctioned, as its seems to have a great deal of historical significance.

The details surrounding the discovery of the breast-plate are vague and restricted to those the auction-house and finders have told the media.

It was allegedly found in 2001 by two brothers who were out walking in the desert. They were about 200m to the side of the Strzelecki Track and about 40km south of the nearest town of Innamincka (population 15) in a very remote part of the Strzelecki Desert. There is no mention of a metal detector being used. The brothers say the breast-plate was sticking out of the sand, “half-buried in a dune”. (Melbourne Age, 10 February 2007, page 5).

The Strzelecki Track is in the Innamincka Regional Reserve (a Regional Reserve being a type of conservation status in South Australia administered by the Department of Environment and Heritage, which allows multi-land use – conservation, tourism, pastoral, oil & gas exploration) and which is Crown Land. The area where the plate was found has recently been assessed for heritage values and recommended to be included on the Heritage Register http://www.environment.sa.gov.au/heritage/pdfs/surveys/birdsville/sections_1-2.pdf

The brothers picked up the plate, read the inscription and “thought it might be valuable” (The Age, op cit) and took it home where they placed it in a safety deposit box. They told no one of their discovery. The plate was presented in 1861 and the brothers decided to wait until 2011, the sesquicentenary of the expedition, to have the plate valued.

Consequently, it could be assumed that the excavation was illicit and certainly not a controlled archaeological dig. Derek points out that we don’t know what the Yandruwandha did with the plate after its presentation, but there is the possibility that it was interred with its owner and was therefore removed from an indigenous burial site. The clumsy and amateur way it was found and the length of time it has taken to be reported reduce the possibility of further study.

The Aboriginal Heritage Act (1988) requires discoveries on private land to be reported to the Minister as soon as possible. The Act prevents excavating, disturbing or removing artefacts;

21—Excavating sites, objects or remains
A person must not, without the authority of the Minister, excavate land for the purpose of uncovering any Aboriginal site, object or remains.

And the Act prevents the sale and removal from the State of any artefacts;

The Minister has the right to compulsorily acquire artefacts at a valuation set by the Minister or a Land and Valuation Court.

However, if the Minister feels there has been an offence committed, (which in this case I would suggest is a possibility), the Minister can order the Crown seize the item.

33—Forfeiture of objects
Where the owner of an Aboriginal object is found guilty of an offence in relation to
that object, the court may, in addition to any penalty that the court may impose, order
that the object be forfeited to the Crown.

It is an interesting case and raises the question whether the finders should be allowed to profit from their discovery given the circumstances of the find and their subsequent actions.

the SA government has announced the breastplate will not be sold at auction and it has been declared "an Aboriginal object of significance".

"The circumstances in which the breastplate was found and its true ownership will now be the subject of investigation,"

"I have satisfied myself that it is authentic.

"I have satisfied myself that it is an item of Aboriginal heritage and now it's a question of investigating its true ownership."