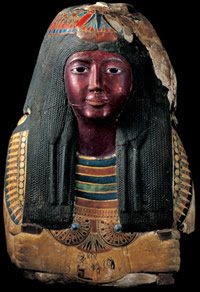 The White House announced back in September that President Bush will nominate Brent R. Benjamin to serve on the Cultural Property Advisory Committee for three years. David Gill commented on the appointment, as did Wayne Sayles. Earlier in July, Robert O'Brien, a Los Angeles attorney was nominated as well, though his appointment attracted little notice.

Ton Cremers, an administrator on the invaluable Museum Security Network argues this was an "outrageous" appointment. The reason for the concern is this antiquity, the Ka-Nefer-Nefer mask which I discussed at length last year.

It was stolen from a storehouse in Saqqara sometime between its excavation in an archaeological dig in 1952, and its acquisition by the St. Louis Art Museum in 1998. It may be worth examining this acquisition in more detail. The best summary of the dispute I have found is this 2006 article in the Riverfront Times.

As always, the antiquities trade presents a number of questions. Was Benjamin at the museum in 1998 when it acquired this object? No, he came a year after the mask was acquired. Do his actions with respect to this mask disqualify him automatically from serving on the committee? I'm not sure they do. Does this ongoing dispute between Egypt and the St. Louis Art Museum automatically disqualify Benjamin from serving on the committee? Not according to President Bush, but did the Museum really have clean hands when they acquired the mask? The answer I think is not really.

They purchased it from Hichaam Aboutaam, who has been linked with looted antiquities. The work had been displayed at a Museum in Geneva when the SLAM was considering purchasing the work. However, the museum sent Mohammed Saleh, a retired director of the Cairo Museum a letter asking:

"[We have] been offered a mummy mask of the 19th dynasty and I was wondering if you know of any parallels to this object. I have never seen anything quite like it with a reddish copper-like face probably owing to the oxidation of the gold surface. It is currently on exhibition in the Egyptian exhibition at the Museum of Art and History in Geneva. I would greatly appreciate your thoughts on any parallels you might know of this piece and hope that I might have the opportunity to speak with you in several weeks by telephone about this opportunity."

Saleh of course was not perhaps the best person in Egypt to contact about the mask. Shouldn't someone on the Supreme Council on Antiquities have been better positioned to handle this request? Unfortunately this is the shady kind of enquiry which can pass for thorough provenance research in the antiquities trade. I think its likely perhaps that the SLAM was not too eager to look to deeply into the history of this object, for fear they would be unable to acquire it. The museum was told by the seller that the mask was seen at an antiquities dealer in 1952, and it remained in the ubiquitous "Swiss Collection" for the next 40 years. An expert hired by the museum, Peter Lacovara, reasoned that the mask was probably awarded to the excavator after the 1952 excavation. This would account for its appearance at a market in Brussels soon after, though refuting that fact is nearly impossible at this point.

Egypt has a tenable claim perhaps, but this is a close case. I'm not aware of the specific steps Egypt has taken in response. They have seemingly argued that the mask was stolen at some point from an antiquities storehouse. Now, its their cultural heritage and they're free to do with it what they please, but Egypt can be criticized on two accounts. First, is it really the best idea to have a unique piece like this mask just sitting in a warehouse for fifty years? Second, had Egypt documented its collection and its holdings more completely, they would have had a much stronger legal and ethical claim.

In any event, nobody looks really good in this dispute. Not the museum, the Phoenix gallery, nor Egypt. But I'm not sure Benjamin, by merely refusing to return the mask outright to Egypt has disqualified himself from serving on the CPAC, which it should be mentioned is comprised of individuals from all the disparate heritage interest groups, including archaeologists. Also, the CPAC has never refused a request made by a nation of origin.
Posted by Unknown at 8:36 AM