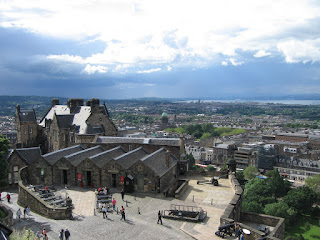 Severin Carrell has an interesting story in the Guardian on UNESCO's concerns over how the UK is protecting and preserving these ancient sites:

Edinburgh
Site The "remarkable" medieval Old Town and Georgian New Town of central Edinburgh [Pictured Above] were listed in 1995.
Problem Unesco fears several building projects in the city centre and Leith docks will damage the site's architectural heritage. It "deeply regrets" the city has approved a hotel, office and housing complex by the Royal Mile, and is sending inspectors to visit.

Stonehenge and Avebury
Site The neolithic stone circle and avenues, and the associated megalith circles at Avebury, were listed in 1986.
Problem A cause of anxiety for 22 years, Unesco is angry that plans to reroute the A344 with a tunnel and build an offsite visitors' centre have again been scrapped. It "regrets" the continued delays and "urges" ministers to act quickly.

Neolithic ruins, Orkney
Site Skara Brae, Maeshowe and the Ring of Brodgar were among the ancient sites listed in 1999.
Problem Three planned wind turbines will be visible and Unesco wants the project stopped. Historic Scotland agrees they will damage it. A public inquiry will report soon.

Bath
Site The city's grand neo-classical Georgian crescents, terraces and squares were listed in 1987.
Problem Unesco fears plans to build 2,000 flats in buildings up to nine storeys, and an engineering school sponsored by James Dyson, will damage the site's setting. It is sending inspectors and wants the schemes blocked until its committee has studied the plans.

Liverpool
Site Its maritime mercantile city, with its churches and Georgian warehouses, was listed in 2004.
Problem Unesco is happy the city swiftly acted on concerns that a new museum, a 24-storey tower and a new conference centre threatened the site's setting and integrity. Unesco wants further action to protect it.

Westminster, London
Site The Palace of Westminster, Westminster Abbey and St Margaret's Church were listed in 1987.
Problem Unesco believes several new tower blocks, including the 170-metre Beetham tower in Southwark and a 144m tower at Doon Street, will affect the site. It is annoyed its demands for a buffer zone and a detailed study of the skyline have been ignored.

Tower of London
Site The Norman tower and its 13th-century walls were listed in 1988.
Problem New buildings, such as the 66-storey "shard of glass" tower and a 39-floor tower at Fenchurch Street, will dominate the skyline. Unesco "regrets" the UK has failed to implement a robust buffer zone or an effective local plan. It is threatening to put the tower on its "world heritage in danger" list.