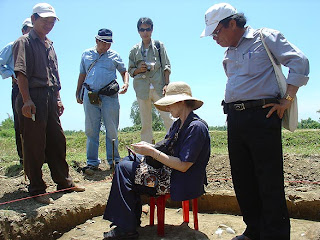 The LA Times Jason Felch has written a fascinating series on Roxanna Brown, the expert in Asian pottery who died in federal custody. She was the first person arrested in the massive searches in Southern California early this year.

These are highly-recommended for anyone interested in this investigation and the antiquities trade generally:

Part 1: a passion for art, a perilous pursuit

Part 3: Once an aid in a federal probe, antiquities scholar becomes a key target

It's a nuanced picture of a complicated life which met a tragic end. A couple of things will jump out when you read the series. First, it seems she aided the initial stages of the federal investigation. However she wasn't entirely forthright and it soon became clear that she was complicit in the criminal activity as well:

In an e-mail dated April 2002 that bears her name, she confirmed that she had received $14,000 in cash from Olson for a prehistoric bronze. Two months later, another e-mail from Brown advised Olson's grandson of a Thai bank account to which additional money could be sent.

Brown's role in the alleged scheme had continued even after she had helped investigators uncover it, the correspondence suggests.

Perhaps most disturbing though is the account of her federal detention, and her serious illness which perhaps could have been prevented with proper emergency care. In response Brown's family has filed a lawsuit.

What emerges is one complicated story. Brown is a sympathetic figure in many ways, immersing herself in Asian culture and Buddhism; studying ancient ceramics, and becoming one of the World's experts on the subject. But there are a number of indications that she violated the law, and was an active participant in smuggling and in the laundering of illicit antiquities.

The question I'm left with is: what training are antiquities experts given on the ethical obligations they have when they appraise and do scholarly work. Are there professional standards for antiquities experts outside the general AAMD or AAM guidelines?

In the legal profession, we are constantly reminded of our ethical obligations and the consequences for violating those rules. If lawyers violate them, they are sanctioned and if they violations are serious enough they are removed from the profession.

Brown did her graduate work when she was in her fifties at UCLA. Are there programs to instill ethical rules in these experts? I'd be very grateful if folks would drop me an email or leave a comment if these do exist, and if they don't whether they should.
Posted by Unknown at 1:26 PM

I had renewed my friendship w Rox after years of not knowing what had become of her... we knew each other growing up in the western suburbs of Chicago...attending HS at Argo Community HS. We dated ocasionally...then life happened, I went off to war in Asia and Roxanne became an independent correspondent in Asia...I somehow got in contact with her sister and she gave me me her e-mail and we re-connected...after I learned about her life...the tragedy she had encountered and her appointment to the Museum in Bangkok...we wrote each other for over a year...discussing original China porcelins and what I should look for in America because the Chinese were eager to repurchase original pieces...much like Japan had done. I never pursued her recommendation, but did keep in touch with her...then he rmail stopped. It was in the beginning of 2008. I continued e-mails, but no response. It wasn't until January of 2009 that I was informed she had died...no less in prison...for a federal offense. This does not make any sense to me because Roxanne(a) was such a gentle soul, and she had endoured always been the one to care about those around her. I am saddened by the fact she died alone...and without those who cared so much for her...she devoted her life to the preservation of the arts and particularly to the antiquities of Asian pottery.