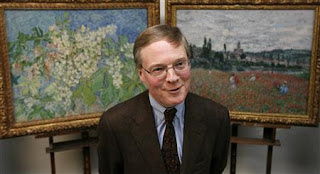 Two of the four works stolen from the Buhrle Collection have been recovered at a mental hospital 500 yards from the private art museum in Zurich. Monet's Poppy Field at Vetheuil and van Gog's Blooming Chestnut Branches were discovered in a parking lot, still behind their display glass and completely unharmed. The two easier-to-carry works, Degas' Ludovic Lepic and his Daughter, and Cezanne's Boy in the Red Waistcoat are still missing.

There's no word about how long the car has been parked in the lot. Did the thieves leave it there immediately after the theft? Or, did they return it there to show they still had the works and were serious about a ransom?

There are also indications that the returned van Gogh may in fact be a copy (Ger.) by his friend and homeopathic physician Paul-Ferdinand Gachet. The Weltwoche, a German-language weekly newspaper publiched in Zurich, has investigated these claims in recent years. Gachet's copies of impressionist works were the subject of a 1999 retrospective at the Met.