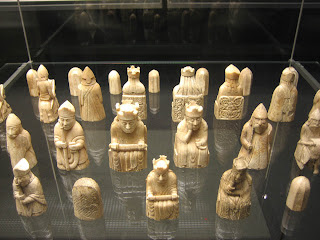 I have recently come across some very interesting excerpts from Scottish Parliamentary Questions and Answers. Now, these are seldom mistaken for serious policy debate, but these reveal some shortcomings in current policy. There exists a serious gap from what Alex Salmond and the Scottish National Party are saying about repatriation, and what they are actually doing.

First, with respect to "tainted cultural objects", the Scottish Labour Party's Shadow Minister for Culture asks what Scotland is doing to ensure stolen or looted objects aren't bought and sold in Scotland. The answer, it seems, is not much.

Q S3W-8645 Malcolm Chisholm: To ask the Scottish Executive what
legislative changes it believes are required to ensure that dealing in
tainted cultural objects does not occur in Scotland. (SP 21/01/08)

A Answered by Linda Fabiani (08/02/08): While we are not aware that
Scotland has a problem with this type of illicit activity at present, the
government remains sympathetic to such legislation and we are looking at
the options available to us, including examining legislation that already
exists such as the Dealing in Cultural Objects (Offences) Act 2003. This
will assist ministers in determining how best to proceed.

It seems Scotland are still waiting to act, but it would be regrettable indeed if they made the same mistakes that were made by their neighbors down south. The Dealing in Cultural Objects (Offences) Act 2003, in force in England and Wales, is not a criminal offence which will likely have any kind of measurable impact on the illicit trade, as I've argued here. The evidentiary hurdles are simply too great given the current state of the art and antiquities trade. One hopes that MSP's don't wait until another high-profile theft or sale takes place before they act. One would have thought the arrests following the recovery of da Vinci's Madonna of the Yarnwinder would have at least eliminated the argument that this is not a problem, and nothing needs to be done.

More interesting perhaps, is the question regarding the repatriation of cultural objects held by Scottish museums. One would think that given the repeated claims Alex Salmond has made for the "return" of objects such as the Lewis Chessmen, his Government would have formulated a cohesive cultural policy. Not so it seems:

Q S3W-8842 Malcolm Chisholm: To ask the Scottish Executive what its
policy is on returning cultural artefacts held in Scottish museums to their
nation of origin. (SP 25/01/08)

A Answered by Linda Fabiani (07/02/08): Decisions on the repatriation of
cultural objects held by Scottish museums are for the Board of Trustees of
each museum to take. The Trustees of National Museums Scotland recently
agreed to requests to return a Tasmanian skull to Australia and other human
remains to New Zealand. Under the National Heritage (Scotland) Act 1985,
Scottish ministers approved the Australian Government and The National
Museum of New Zealand as bodies to which National Museums Scotland could
transfer objects from their collection.

Alex Salmond has been arguing for a return of the Lewis Chessmen for over a decade now. Is that the best cultural policy his government can come up with? They will simple leave it to individual Boards of Trustees.

I'll ask again, what is the cultural or historical imperative which dictates the chessmen should be taken from the British Museum, and returned? And if so, does this mean other treasures such as the St. Ninian's Isle treasure should be returned to Shetland? On the one hand Salmond argues against this perceived injustice which led to the current location of the Lewis Chessmen (even though they are Norwegian), but he makes no corresponding changes in Scotland for objects in its collections, which may have been taken under far more questionable circumstances.
Posted by Unknown at 3:38 AM

We discussed issue before. Maybe it would be helpful to look at the whole controversy from another point of view. In other words, what is the cultural or historical imperative which dictates the chessmen should be kept at the British Museum? I am not arguing here they should be returned to Scotland, but it would seem fair that they are returned to their place of birth, which is Trondheim, Norway. I am not sure how would British museum respond to any such request for return.