Police in Zurich have announced a major theft from an art museum in Zurich. Works by Paul Cezanne, Edgar Degas, Claude Monet, and Vincent van Gogh were taken from the Emil Buehrle art foundation. Details are still sketchy, I'll update more this afternoon when we learn more. This theft follows of course from the theft last week of two works by Picasso from another museum in Switzerland.

Why would someone steal such widely-known works? As I see it, there are four potential answers to this question.

The first, is that a wealthy collector admires the piece, and hired a thief to take it for him. I'll call this the Dr. No situation. This seems the least likely possibility, but the one that strikes a chord with the imagination. Writers in this subject frequently cite the Dr. No as being responsible for thefts, and I admit it makes for good Bond villains, but there has been little convincing evidence that this is why people are stealing rare objects.

Second, the thief may not have known that the object was so rare as to make its subsequent sale difficult.

Third, the thief may simply be trying to kidnap the object. They could then insure its safe return for a generous reward.

Finally, perhaps there is a market somewhere for these works. Perhaps it may not be all that difficult to sell these kind of works. This strikes me as the most troubling possibility, but also the least likely, as these works will likely be widely-publicized and photographs will be circulated as more details emerge.

Swiss police have held a press conference and released more details on yesterday's massive theft in Zurich. Three men entered the Buhrle foundation 30 minutes before closing yesterday, and while one man forced museum workers to the floor, the two other men collected four paintings:

Cezanne's Boy in the Red Waistcoat 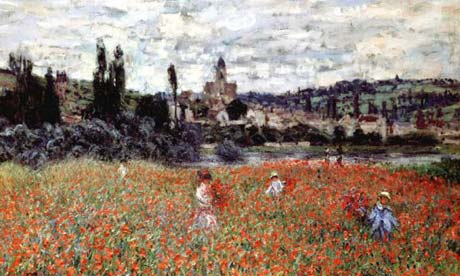 Degas' Ludovic Lepic and his Daughters

The estimated monetary value of these stolen works is about $164 million USD, which would put it near the top of works stolen in recent decades; I'll leave to art historians the task of evaluating the cultural value of these works which may be far larger.
Posted by Unknown at 6:18 AM