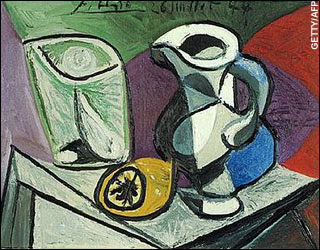 The thieves set of a security alarm when they were leaving, and police are speculating that the thieves may have hidden in the museum until after closing, and then broke out with the works.

Both the Telegraph and the BBC are pointing out this morning that works by Picasso are frequently stolen. One of the now-recovered works from Sao Paolo was a Picasso, and police in August recovered works stolen from the artist's granddaughter's home in Paris.

He's a popular artist to steal certainly, but these works will never be sold on the open market, they are too widely known. I think a more interesting issue is security when these works are loaned out to regional museums like this one, which was the problem with works stolen in Nice last August. I think there are a lot of benefits to loaning works, and sharing collections; however there are trade-offs. Often these smaller regional museums have less-sophisticated security systems given their smaller budgets and collections.
Posted by Unknown at 4:21 AM