More on the California Searches 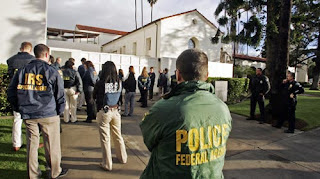 "I have rarely seen Federal agents come out in such force as they did today".

That's what LA Times staff writer Jason Felch remarked yesterday on KCRW. He also has a very nice overview of the investigation so far, with links to the search warrants in today's edition of the LA Times.

The massive search yesterday of the LA County Museum of Art, along with Pasadena’s Pacific Asia Museum, the Bowers Museum in Santa Ana and the Mingei Museum in San Diego has yet to result in any arrests or indictments. However it seems to be just a matter of time. It goes without saying that when Federal agencies and prosecutors get involved, they seldom lose.

Much of the allegations were established by the undercover work of a National Parks Service employee. Based on the search warrants, it seems the investigation started in response to looting of Native American sites, and quickly expanded.

Robert Olson, who spends a lot of time in southeast Asia is known in the affidavits as "the smuggler". The other main target appears to be Jonathan Markell, of the Silk Roads Gallery.

This is a powerful image which appeared in the LA Times today, with agents from the IRS, Immigration and Customs Enforcement, and the National Park Service searching prominent California art institutions. Even if this search does not amount to a criminal prosecution, it sends a powerful message to the antiquities trade, including museums that purchase these objects, that federal agents are watching, and the trade needs to quickly and efficiently change the way it does business.

I think we can take a few things away from this investigation. First, the alleged objects were of limited value. These aren't comparable to the Euphronios Krater for example. They are smaller objects, but were bought and sold in greater quantities. Objects were allegedly illegally excavated from Thailand (most from the Ban Chiang site), China, Myanmar and Native American sites in the US.

Second, I think this is compelling evidence of a systemic problem with the antiquities trade. Many have discussed these problems before. The lack of provenance, and the ease with which smugglers can elude customs agents makes policing the trade difficult. However, it would seem now that those who would buy and sell objects can no longer afford to cut corners, and must now conduct far more detailed investigations into how objects came to market.

Finally, I think this investigation reminds us that Roman and Greek objects are not the only classes of antiquities that are smuggled, despite the attention the recent returns from US institutions have indicated. Clearly, the question now is how many indictments or convictions will ensue, and how will the individual art institutions and the relevant industry codes of practice evolve to prevent this kind of criminal activity in the future.