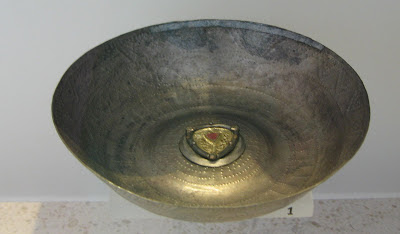 Shetlandtoday is reporting that the MSP for the Highlands and Islands and member of the Scottish National Party Dave Thompson has welcomed Alex Salmond's calls for the return of the Lewis Chessmen as a positive indication that the St. Ninian's Isle treasure will be returned to St. Ninian's Isle. Thompson wrote in a letter to the Scottish culture minister and the director of the National Museums of Scotland:

I am pleased the First Minister has decided to raise the matter of the Lewis Chessmen. I think it opens up an interesting debate on how we support our local museums. For the past two months I have been acting on behalf of the people of Shetland to try and secure the St Ninian's Isle Treasure back to its rightful home. I firmly believe that artefacts of local significance should be kept locally. It undoubtedly boosts local tourism and is beneficial to the community as a whole, both historically and culturally.

As I argued last week, I'm not sure what ethical basis Salmond can make for the Lewis Chessmen. They were acquired legally and rightfully, and they were in fact almost certainly created in Norway. Norway would seem to have a better ethical and cultural claim to the objects than would Scotland. If Salmond does want the Chessmen returned, that precedent could be used to repatriate a great deal of objects currently on display at the National Museum of Scotland and elsewhere. It might also commit him to abandon the notion of a "Museum of Scotland".

First, a bit of background of the St. Ninian's Isle treasure. The objects were discovered by a University of Aberdeen archaeologist in 1958. The treasure is comprised of 28 silver objects and a porpoise bone. The resulting dispute Lord Advocate v. University of Aberdeen and another, 1963 S.C. 533, saw the University unsuccessfully challenge the notion that the found objects should fall to the Crown. St. Ninian’s Isle is a small body of land a short distance from Shetland. In 1955 a University of Aberdeen team of researchers began excavation work aimed at finding the ruins of a medieval church. In July of 1958 the 8th century Celtic hoard was discovered. The Lord Advocate then brought an action seeking a declaration that the find belonged to the Crown, while the University and the landowner contested the claim.

In the ensuing legal dispute two arguments were advanced by the University. First, it was argued the feudal common law rule had no application in Shetland and Orkney where land was “udal”, and not subject to the feudal rules, as a result of their acquisition in the 15th century from Denmark and Norway. However the trial judge Lord Hunter held

[A]lthough treasures found in the ground are inter regalia, in the sense of things which the law appropriates to princes and states, and exempts from private use, the right to treasure is a right belonging to the sovereign by virtue of his royal prerogative and as head of the national community rather than by virtue of his position as universal landlord.

This argument was supported on appeal. The second argument urged the court to recognize rights in udal lands as superior to those of the crown. In advancing the argument the University compared treasure trove to undiscovered minerals. However this reasoning proved unsuccessful as well, as “plenary ownership of land carries with it everything a caelo usque ad centrum, including even all moveable articles in or on the land.” As such the ordinary laws of Scotland would apply and objects qualifying as treasure under Scots law “must be precious; they must be hidden in the ground; and there must be no proof of their property or reasonable presumption of their former ownership.”

The case presented interesting legal questions for Scots property law, but from a cultural property policy perspective, the excavation, study and display was a complete success. The site was professionally excavated, the archaeological context was recorded, and the treasure is now on public display in Scotland. The question is, does Shetland have a claim for the objects? In my view that's a question of allocation domestically. Scotland, which is roughly the size of South Carolina, has a surprising degree of local and regional pride which can sometimes turn heated.

I think it may be worth asking whether the St. Ninian's treasure should be returned to Shetland, however that would require Salmond and the SNP to formulate a cohesive cultural policy. At present it would appear if he is merely making statements, which are often misleading, to depict Scotland as a continuing victim of English imperial aggression. If that happens though, there will be trade-offs. Researchers may have more difficulty studying objects as they may not have access to objects from other cultures which have been returned, and creating a safe and secure display facility for all of these various objects will certainly be an expensive undertaking. These are important questions to be sure, but I haven't seen a serious analysis of these issues despite these calls for return.

(Hat tip: Archaeology in Europe).
Posted by Unknown at 3:57 AM

Thanks for the interesting commentary, and the previous piece on the Lewis chessmen. As a member of the Scandinavian walrus community, I demand that all pieces are in fact returned to a small rock off the coast of Trondheim.

Seriously, though, it's a bit rich for Salmond to call for these objects to be returned to Scotland (does he want them in Lewis or Edinburgh?), while at the same time facilitating plans to despoil a stretch of Scottish coastline.