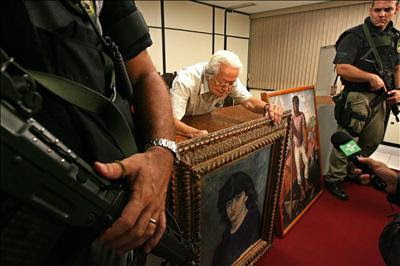 The AP is reporting that the two works stolen last month in Brazil have been recovered in Sao Paulo. The recovered works, Portrait of Suzanne Bloch, 1904 by Pablo Picasso and O Lavrador de Cafe, 1939 by Candido Portinari were recovered in a home on the outskirts of Sao Paulo on Tuesday. The works were stolen last month, by thieves using only crowbar and a car jack. Given that, are the assualt rifles, pistols, and bullet-proof jackets worn by guards at yesterday's press conference necessary?

Julio Neves, the president of the Sao Paulo Museum of Art said the works are "in absolutely perfect condition", and "[t]he museum is upgrading and improving its security system to prevent this kind of thing from happening again." There is no word on how the works were recovered, as police are still investigation as "other suspects remain at large and providing details could jeopardize the ongoing investigation." Given the comments of the city's chief police inspector Mauricio Lemos Freire, it seems like they are investigating this as a theft-to-order, and are still going after the buyer who ordered the theft.
Posted by Unknown at 4:30 AM