Suspicious Bronze not the Fano Athelete

Earlier this month in a Jan. 14th article the L.A. Times had apparently uncovered some evidence linking the Getty to criminal wrongdoing in the acquisition of this piece.  This bronze statue has been known by many names, including the "Getty Bronze", the "Fano athelete", or the "Bronze statue of a victorious youth".  I've received a note from Julie Jaskol, Assistant Director of Media Relations at the Getty notifying me that the "Bronze" discussed in the letters was not this Bronze Athlete.

The Times has corrected the story:

Bronze statue: A Jan. 14th article in Section A about an Italian legal  case involving the J. Paul Getty Museum's statue of a bronze athlete mischaracterized a 1976 letter to museum director Stephen Garrett. The  letter from the late antiquities expert and Getty adviser Bernard Ashmole, which referred to the museum's "exploits over the bronze statue" as a "crime," was describing a different bronze statue in the museum's collection. Garrett, who initially told The Times the letter referred to the bronze athlete, now says he was mistaken. 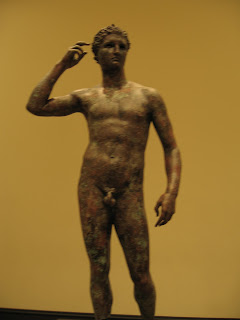 I wrote a very long summery of the dispute back in 2007.  The statue was found by fisherman in the Adriatic in 1964, smuggled out of Italy, and eventually purchased by the Getty in 1977.  The bronze was discussed a great deal in the very public battle between Italy and the Getty over other looted objects in recent years.  Yet there was a lack of direct evidence linking the Getty to any wrongdoing in the acquisition.  Criminal proceedings were brought against some of the fishermen and handlers of the statue in Italy, yet there was not enough evidence to secure a conviction.  At present a prosecutor has brought suit in Italy to attempt to secure possession of the statue.  Had the letter discussed in Felch's original piece referred to this bronze, this would have provided strong corroborating evidence in the court of public opinion for the return of the bronze.
Posted by Unknown at 6:28 AM