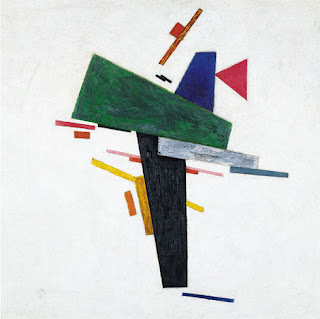 The Guggenheim has announced it has reached a settlement with the heirs of Kazimir Malevich.  At issue was this untitled work, created in 1916.  The piece was shown at an exhibition in Berlin in 1927 along with 70 other works, but the artist left the paintings behind before returning to the Soviet Union.  He was probably rightly concerned that his works would be confiscated if he returned them to the Soviet Union; and in fact they were later banned by the Nazis as well.  The work was purchased by Peggy Guggenheim in 1942.

The terms of this settlement are confidential.  Malevich's heirs have recently been pressing claims to many works they believe were improperly obtained.  In 2008 they settled a claim for four works now in the possession of the city of Amsterdam.