Should the Getty send the Bronze to Italy? 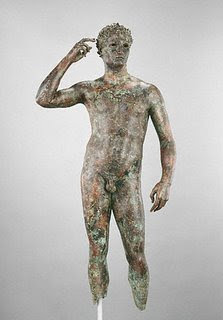 We are approaching the deadline imposed by Italian Culture Minister Francesco Rutelli to send the "Bronze Statue of a Victorious Youth" to Italy. Rutelli has said the Getty has until the end of July to return 47 antiquities to Italy or risk a "real embargo". The Getty has announced it will return 26 of those objects, not including the bronze, but the two sides seem unable to broker a deal. In early July Rutelli announced from Fano, the Italian fishing community where the fishermen first brought the bronze ashore, that he had submitted a "final proposal for dialogue and agreement [and if no deal is done,] a real conflict will begin, a real embargo--that is, the interruption of cultural and scientific collaboration between Italy and that museum."

I'd like to summarize the reasons the Getty has refused to send the bronze to Italy, and why Italy wants the bronze to be included with the other repatriated objects. I'm curious how folks feel about this dispute. I've added an unscientific poll at the left where you can cast your vote.

Before I summarize the two arguments, I should make clear that Italy has no legal claim to the statue. They cannot file a suit and ask for the return of the object both because they cannot prove the statue was removed from Italian waters, and the statute of limitations has probably expired anyway. Rather Italy is making an ethical argument for the statue.

How the Statue Was Found:

“The Bronze Statue of a Victorious Youth” is an almost life-size figure of an athlete wearing a victory wreath. The Statue was created in Greece, possibly by Alexander the Great’s Court Sculptor Lysippos, but it may have been sculpted by another. It was created sometime between the 4th and 2nd Century B.C.

In June, 1964 the Statue was recovered in modern times, by complete accident, off the northern Adriatic coast by fisherman from the Italian city of Fano. 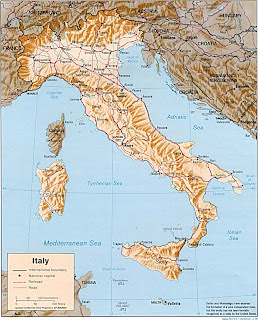 They pulled up a heavy object covered in barnacles. The most likely explanation for the find in the Adriatic is that it was taken from Greece in Roman times, and the vessel was lost at sea. A number of Greek objects were taken by invading Roman armies, the most noteworthy instance was during the fall of Syracuse. When the fisherman returned to Fano, they decided to sell the statue. The statue changed hands a number of times.

We know that Giacomo Barbetti purchased the statue from the fisherman. For a time, Barbetti and his two brothers stored the statue at the home of Father Giovanni Nagni. Barbetti then sold the statue to another man for 4,000,000 lire, not a great sum of money. It would have amounted to about $4,000. In 1966, the 3 Barbettis and Father Nagni were charged with purchasing and concealing stolen property under Italy’s 1939 Antiquities Law. The prosecution reached the Court of Appeals of Rome, however it overturned the convictions for 2 reasons (1) The prosecutors did not establish the statue came from Italian waters, and (2) there was insufficient evidence demonstrating that the statue was of “artistic and archaeological interest”. After the Barbetti’s sold the statue, the Provenance (chain of title) of the statue is a bit vague, and open to some speculation. Most likely it went through a series of owners, in an attempt to achieve a bona fide purchase at some point. It went from a Brazilian Monastery to England, and later to Munich.

In 1977, the Getty Trust purchased the Bronze for $3.95 million. It has been publicly displayed since 1978. Until 2006, Italy made no more formal requests for the Bronze, though they did ask the Getty to evaluate the possibility of returning the statue to Italy in 1989.

Italy’s claim relies on the creation of some kind of nexus between Italy’s cultural heritage and the Bronze based on the time it was brought ashore by the fishermen at Fano. Italian authorities have at various times labelled the bronze as stolen, despite the fact Italy is unable to establish the statue was found in it's own national waters, and as a result its national patrimony law will not apply. However, Italy does ban the export of antiquities, and the statue was almost certainly illicitly removed from Italy before traveling to Switzerland and Frankfurt before its sale to the Getty.

The Getty has said that Italy had no claim to the bronze once it left Italy. In fact, Italian law would shield a good-faith purchaser in this case. Italy was unable to establish the statue was found in Italian waters during the criminal prosecutions in the 1960's. Also, the Getty has argued the statue has been at the Getty far longer then it ever stayed on Italian soil.

We don't know if the Getty knew about the statue's illicit export when they bought it, or if they tried to research its provenance before the purchase. I've stated who I think has the stronger claim in the past, but I'm interested in what others may think based on the arguments put forward by both sides.

I can understand both sides of the story, however I'm on the Getty's side. As far as I know, anything found in international waters is first come first serve. I understand that the statue was originally made in Italy, but considering it was stolen or shipped or whatever way before it was found in modern times...for all we know, the statue might have been a gift from an Italian to someone in another part of the country, etc. Either way, a country cannot/should not be able to lay claim to an item just because it was dragged onto their land from international waters, unless it is very well known that that particular piece is from their land and should stay there...say for example if somehow the Statue of Liberty or a piece of it ends up in international waters, it is well known enough to stay in America. The same goes for any art object that is a symbol for a particular country. I remain firm, at the moment, that the Getty has a right, legally, to keep the bronze statue. Maybe in the end they can reach an agreement to display it in Italy for so long and go back and forth.