The Met Announces the Return of two statues to Cambodia 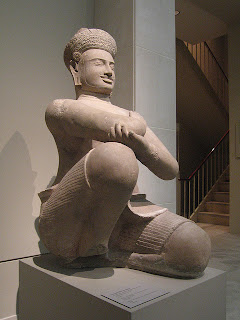 Today, Ralph Blumenthal reports that the Met has agreed to return two 10th century statues to Cambodia. The Met's director Thomas Campbell is quoted as saying:

This is a case in which additional information regarding the 'Kneeling Attendants' has led the museum to consider facts that were not known at the time of the acquisition and to take the action we are announcing today.


The piece reports the statues may have been removed from Cambodia at around the same time the Koh Ker statue was removed, which is the subject of an ongoing forfeiture action by a federal prosecutor. Little information has been reported that I can find on the precise circumstances surrounding the removal of these statues from Cambodia. We know the instabality and conflict taking place in southeast Asia at the time of course. The statues were donated by Douglas Latchford in a series beginning in 1987. The parts of the statues were broken into pieces at some point, and the individual pieces of the figures were donated between 1987-1992. Conservators at the Met reattached the heads and bodies in 1993.

The Met should be congratulated for doing the right thing here with these objects which have such an important connection to Cambodia. This return may also give pause to Sotheby's, the Norton Simon museum, and others who have objects which were removed from Cambodia during this period.