Repatriated Objects from the Getty in Naples 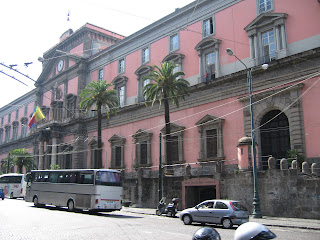 Over the weekend I traveled with a group from Amelia down to Sorrento and the Bay of Naples. On Saturday we went into Naples and visited what may be the most important Italian archaeological museum in Italy, the Naples National Archaeological Museum. It was every bit as stunning as advertised. A grand old beautiful shambling wreck of a museum in a beautiful mess of an Italian city, with the Farnese Bull, and the Alexander Mosaic, and much more. It was a lovely visit to one of Italy's very best museums. It was founded in the 1750s by Charles III of Spain, and houses a number of important works from nearby Pompei and Herculaneum, which had been rediscovered and excavated in the early part of the 18th century. 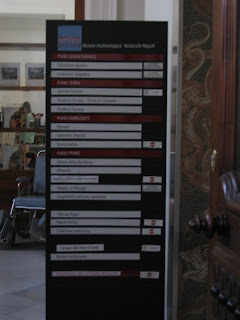 But on the way out, a sign indicating what exhibition rooms were open or closed stood out. We hadn't noticed it on the way in. I've posted the picture here, and even though it is too blurry to read, the red text at the bottom says 'Restituzione dal museo J.P. Getty', but the gallery was closed. One of our group asked (in Italian), why the gallery was closed, and was told apparently it was due to a lack of funding.

He asked, 'what objects were in the gallery from the Getty', and the museum employee responded that there was not enough funding for an inventory, probably meaning they did not have enough money to prepare a brochure. So which objects were meant to be displayed, the museum visitor can only guess at. Now I have no way of knowing if this is a typical case. Perhaps we caught the museum on a day where they were understaffed—though it was a Saturday. We paid our 8 euros each, though, and did our small part. There were a number of closed off areas, as you can perhaps make out in my amateur photograph, so there are other areas closed to the public.

Italy is currently enduring its own austerity measures, and like other nations which are cutting back, culture and heritage are some of the first targets. So perhaps in more prosperous times these objects will be displayed more regularly. But even with a good reason for the closing, even with a good reason for restitution, what good is a return if the objects can not be displayed? It will reduce the demand perhaps, but keep these objects hidden away, at least for our small group.


The museum was, for me, stunning. Whether the objects from the Getty (whatever they were) would have compared to the Farnese Bull, the Hercules at rest pictured here, or any of the stunning micro-mosaics can only be guessed at. But it is a striking irony that all of the work and time and effort spent repatriating objects from the Getty was wasted on this visitor, who took a plane, train, taxi, and bumpy ferry, walked the rainy streets of Naples to the Museum, and was still unable to see the objects 'in context' in Naples. This certainly does not justify for me the illicit and illegal trade in these objects. It does though I think crystallize just how vexing the antiquities trade, museums, and repatriation issues can be.
Posted by Unknown at 3:41 PM

Unfortunately, Italy's cultural establishment has been underfunded for years and the "chiusu" sign has been the unwelcome greeting for many who had hoped to see some of Italy's unparalleled artifacts.

I can particularly empathize because I spent hours on a train and bus going to visit the magnificent archaeological site at Paestum only to find the gates closed due to a strike of the site's guard force.

Thank you for this post, Derek. I explore the issue of repatriated antiquities in Athens, Greece in my own post on the SAFE blog: http://safecorner.savingantiquities.org/2011/07/repatriation-effects-greeces-national.html

It is an interesting situation regarding the managment of archaeological sites and museums under the state's control and budget as the case of Greece (and I believe Italy too) demonstrate. The government is obviously running out of money, but there is resistence in allowing private funds to be used as it is seen as commodifying culture.

As far as repatriation law suits, I believe the fight for the return of objects is an ethical endeavor, but no longer financially sustainable for these 'source' countries. It will be interesting to follow how such claims are pursued in the future.

That museum contains so many impressive artifacts, but the run down state of the museum (which, I'm sure you noticed, is pretty consistent with the way the rest of Naples looks) actually distracts from the amazing contents of the museum. In any event, I appreciate your pointing out that the Getty exhibit was closed for budget reasons, but I'm still not sure that that justifies any result other than the Getty's return of the objects to Italy. As a fellow attorney, I know you can appreciate the idea that even if the winning party (Italy) does not do anything with the artifacts, that does not justify the losing party (Getty) who looted or knowingly purchased the looted goods to not have to return the goods. I still think that the result that the Getty returned the objects is perfectly justified under the circumstances and Italy has every right to do anything with the property that it chooses. In my opinion, the only thing the art community can do to change the fact that these artifacts are not all on display is to work out more of these long term loan agreements between American and Italian museums.

I love cultural and for me this post was really awesome and incredible. How I like the man statue Hercules, and its nice to knew also that there are objects repatriated from Getty in Naples. You did a great job. Keep posting awesome blogs. Thank you.

house and lot for sale Philippines

So in this blog is very nice information.....