The Fire at the L'Institut d'Egypte a "great loss" 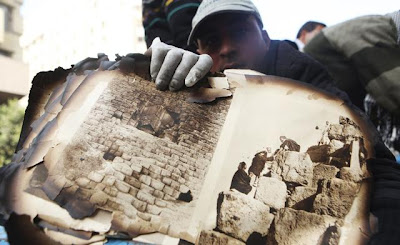 One of the frustrations about writing about the protection of art and heritage is the biggest news items are often really grim, and there can often be little room for optimism. On Sunday the Institute D'Egypte caught fire and burned. The Institute was established in 1798 by the French, and held an estimated 200,000 volumes, including rare accounts of Egypt in the 18th Century. I must confess I had no knowledge of the Institute before yesterday, but because I, like many privileged folks in the developed world, have access to Wikipedia, I know it is an important building, and an important repository of information. Yet most Egyptians don't have that luxury. As Larry Rothfield points out, neither the protesters, nor the military seemed to know this was an important building containing books and manuscripts. Initial accounts describe troops throwing rocks down from the roof at protestors, and the protestors responding with molotov cocktails. It is not clear who started the exchange, but the result is clear. An important repository of knowledge has been destroyed. 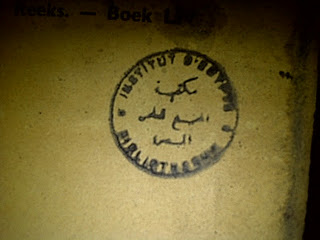 The background for the destruction, which may or may not have been intentional, are rising tensions once again in Cairo near Tahrir Squar. The best current accounts of the destruction and attempts to rescue some of the volumes is the Ancient World Bloggers Group. And so there is at least some room for optimism. Many of the protesters were seen carrying books to a nearby church to attempt to salvage some of them. Also, William Kipycki, Tield Director of the Library of Congress--Cairo, Egypt at the U.S. Embassy photographed the stamps used at the Institute so antiquarian book buyers and sellers will be on the lookout.

Employees at the U.S. Embassy and the American University in Cairo have been reported as offering assistance to do what can be done to minimize continued destruction.


Zein Abdel-Hady, who runs the country's main library, is leading the effort to try and save what's left of the charred manuscripts. "This is equal to the burning of Galileo's books," Abdel-Hady said, referring to the Italian scientist whose work proposing that the earth revolved around the sun was believed to have been burned in protest in the 17th century. Below Abdel-Hady's office, dozens of people sifted through the mounds of debris brought to the library. A man in a surgical coat carried a pile of burned paper with his arms carefully spread, as if cradling a baby. The rescuers used newspapers to cover some partially burned books. Bulky machines vacuum-packed delicate paper. At least 16 truckloads with around 50,000 manuscripts, some damaged beyond repair, have been moved from the sidewalks outside the U.S. Embassy and the American University in Cairo, both near the burned institute, to the main library, Abdel-Hady said. He told The Associated Press that there is no way of knowing what has been lost for good at this stage, but the material was worth tens of millions of dollars -- and in many ways simply priceless.

This is a great loss to all of us.
In terms of Disaster Management Planning, it is often asked what can be done for some of these types of events. Sprinklers are but one element of an overall mitigation strategy that have shown to be very effective in protecting buildings and their contents during civil unrest. This included the riots in Los Angeles CA in 1992. Over 5200 fires were reported during these riots. One building had 9 fires started in it, and each of these fires was controlled by sprinklers. Two other buildings had multiple fires started in them as well, and were likewise controlled by sprinklers with limited losses.
Chris
Marrion Fire & Risk Consulting
chris.marrion@marrionconsulting.com

Isn't this more proof that a country that makes culture an exclusive commodity for a narrow "connected group" runs the risk that it will be destroyed because of that association?

This is a terrible loss; for those unfamiliar with L'Institut d'Egypte and the work of the savants Napoleon brought on his 1798 invasion of Egypt, "Mirage: Napoleon's Scientists and the Unveiling of Egypt" by Nina Burleigh provides an excellent account.
A selection of some of the plates and texts are available here: http://descegy.bibalex.org/.