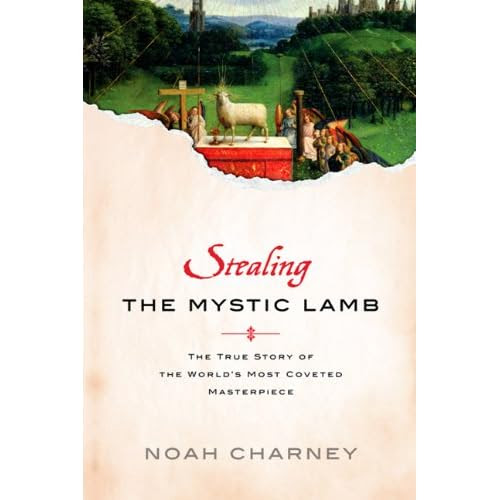 I've just finished reading Noah Charney's "Stealing the Mystic Lamb:  The True Story of the World's Most Coveted Masterpiece".  This review should probably begin with a disclosure.  Noah is a friend and colleague, first an internet acquaintance, and now we meet up every summer in Amelia during ARCA's MA certificate program which he founded.

This work tells the story of one massive 2-ton altar piece, the single most stolen work of art of all time, and one that should be familiar to anyone who has taken an introduction to art history course.

After dropping the reader into history as allied forces are searching for the altar piece during World War II, we learn early on that this work was the prize of Hitler and Napoleon.  That this massive masterpiece was nearly destroyed many times over.  Yet somehow it has endured.

And we should all be glad it has.  The object itself is stunning, Charney in the first chapter takes the reader through the importance of the painting itself, how it helped launch the career of Jan van Eyck, how art historians have puzzled over how much of the work was completed by van Eyck's brother Hubert, how the artist used intricate symbolism, how it helped usher in the era of oil painting and beautiful detail.  But perhaps most importantly, the discussion of this painting and all it symbolizes reminded me why art matters, and how a stunning work of art can change the way we all see the world, and each viewer gets a chance to re-learn or even re-evaluate those shifts in opinion.  And in the end the work begins with a lively account for why individuals have stolen, mutilated, and coveted this work of art.

Next the reader learns about the artist himself, about the "Magician in the Red Turban". the reader also learns about attribution, the recent decline of connoisseurship in the appreciation of art, how the movement of art can cause the re-appraisal of works of art as  happened when the Albert Barnes Collection is preparing to move and many of its Old Master paintings were found to have been misattributed.  We learn about the creation of the Louvre, the place the Ghent altarpiece played in the creation of that museum, and how many of the arguments made for a universal museum were made by Dominique Vivant Denon who served as the architect of the art looting during Napleon's reign.

Charney spends great care telling the story of the altarpiece during both World Wars, noting the debt we art theft writers owe to Karl Meyer, Robert Edsel and Brett Witter's fine work telling the story of the Monuments Men, and Lynn Nicholas among many others.  Yet what really comes through in Charney's book is a breathless story which merges history, towering figures like Napoleon or Hitler and their associates, art, artists, and imagery that revalidates why so many are interested in the study of art theft:  these are really good stories.  And it ends with an epilogue, yet another of the work's enduring mysteries, that should not be spoiled here.