China Wants its Rabbit and Rat Back 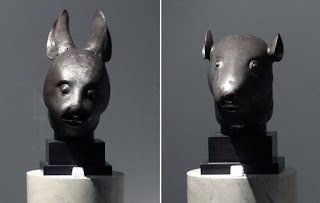 China looks to be redoubling its efforts to repatriate the bronzes from the Summer Palace, enlisting Jackie Chan, erecting a statue of Victor Hugo who decried the looting in 1860, and circulating a petition.

China has renewed a call for the return of relics looted from the Old Summer Palace in Beijing 150 years ago -- an act seen as a cause of national humiliation at the hands of Western armies.

The Yuanmingyuan, a summer resort garden for the emperors of the Qing Dynasty (1644-1911), was pillaged by a joint British and French military expedition during the second Opium War on October 18-19, 1860.

Cultural officials have urged private collectors in China to forgo profits from the antiquities trade and return the looted relics, the China Daily reported Tuesday.

The Yuanmingyuan park authority has also called on museums to return such items, and for a boycott on auctions featuring relics, the Global Times added. . . .

"At least 1.5 million relics from the Yuanmingyuan have either been looted or otherwise lost over the years," the China Daily quoted Chen Mingjie, head of the Yuanmingyuan park administration, as saying.

Xinhua news agency, citing the UN cultural body UNESCO, said some 1.64 million Chinese relics are housed in more than 200 museums in 47 countries, some of which are believed to have been looted from the Yuanmingyuan.

In recent years, cultural relic experts from China have sought to categorise and bring back looted Chinese antiquities, but their efforts have been waylaid by legal and historical obstacles, the China Daily said.