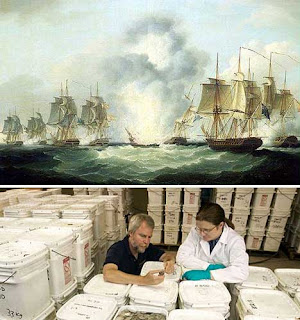 "It is this comity of interests and mutual respect among nations . . . that warrants granting Spain's motions to vacate the Mercedes's arrest and to dismiss Odyssey's amended complaint". So concludes US Magistrate Judge Mark Pizzo yesterday in Odyssey Marine Exploration, Inc. v. The Unidentified Shipwrecked Vessel.

Odyssey Marine has lost in its bid to petition a US court for ownership of the coins, and Spain has prevailed—for now—in its suit to regain half a million gold and silver coins from Odyssey Marine Exploration which recovered them from a wreck in the Atlantic Ocean. The recovery of the coins, thought to be worth as much as $500 million was announced, though the location of the wreck, and information about the wreck was kept secret. In response Spain filed suit, and seized some of Odyssey's other vessels. UNESCO condemned the recovery, and much has been written and discussed about this recovery, considered perhaps the richest haul ever recovered from a wreck.

In the judgment which I've embedded below, the District Court held it lacked jurisdiction over the dispute and the property should be returned to Spain. Though Odyssey Marine attempted to hide the true identity of the wreck, initially code-naming the wreck the Black Swan, the court held that there was enough information to conclude the coins came from the "Nuestra Senora de las Mercedes", a warship which was carrying treasure back from Peru when it was sunk by the British off the Spanish coast in 1804. Spain, soon declared war on Great Britain, a point which may be lost in all this talk of the treasure. This treasure was an important piece of heritage, and all the talk of Odyssey's share prices, and the rich treasure haul shouldn't distract us from why these objects are protected, and why Spain fought so vigorously to have them declared the owner.

So these coins may be destined for Spain, finally, even though these coins were initially taken from Peru, which also asserted an interest. This has been a protracted dispute, and one that may indeed continue at the appellate level. It will be interesting as well to see how much continued involvement Peru has with the appeals process, or if Spain and Peru can come to an agreement about what can or should be done with the objects.


Spain's Culture Minister Angeles Gonzalez-Sinde is quoted by the BBC, calling the decision "a very important precedent for all future undersea discoveries". Gregg Stemm, CEO of Odyssey Marine said "I'm confident that ultimately the judge or the appellate court will see the legal and evidentiary flaws in Spain's claim, and we'll be back to argue the merits of the case."

But for now, US Magistrate Judge Mark Pizzo has the final word, concluding his recommendation, "More than two hundred years have passed since the Mercedes exploded. Her place of rest and all those who perished with her that fateful day remained undisturbed for centuries - until recently. International law recognizes the solemnity of their memorial, and Spain's sovereign interests in preserving it."

For more on the company this older piece from Voice of America is pretty interesting. This suit is really about the continued viability of this kind of business, and the perils of doing so without the support of organizations like UNESCO or other nations of origin:

Hobbies plays a key role for the people who really came to the earth for this purpose, one or the other day people around the world would be discussing about the people who have collected Many World Coins,monuments, old stamps, old notes who will be positioned in the world of Guinness records.