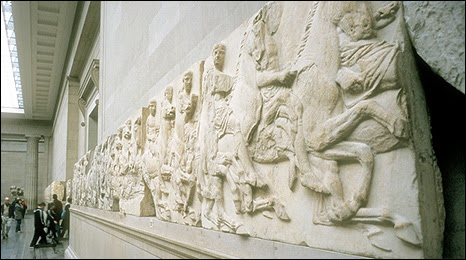 Greek Culture Minister Antonis Samaras has said his nation is not interested in working out a loan arrangement for the Parthenon Marbles.

I can certainly understand that point of view, but at some point don't we need to move beyond the question of whether that taking in 1801-2 was wrongful; and start asking what is best for the marbles and those who want to learn from them today?  I don't want to belabor the point, but isn't the fact that the marbles are still on display at the British Museum a pretty strong indication that their removal was legal, or if not, not subject to current judicial scrutiny?  We can argue about whether their continued display in London is ethical, but not I do not think a legal question any longer.

The government, as any other Greek government would have done in its place, is obliged to turn down the offer," Mr Samaras said, in a statement.
"This is because accepting it would legalise the snatching of the Marbles and the monument's carving-up 207 years ago."
He added that he was prepared to discuss lending Greek antiquities to the British Museum "to fill the gap left when the (Parthenon) Marbles finally return to the place they belong".
Mr Samaras was responding to comments made by British Museum spokeswoman, Hannah Boulton, on Greek radio.
She said under existing British Museum policy the museum would consider loan requests by any foreign government, including Greece.
But all requests would be considered on a case-to-case basis, taking many factors into consideration, including fitness of the item or items to travel.
Greece would also have to recognise the museum's ownership rights to the sculptures, which is a loan condition.

Ms Boulton told the BBC that the British Museum had not received a request from Greece, nor had it offered the marbles for loan.

As you know, I have been a regular reader of your blog over the last few years and have learnt quite a lot from you. I must say however, that what you have written today surprises me a lot, especially this sentence: “I don't want to belabor the point, but isn't the fact that the marbles are still on display at the British Museum a pretty strong indication that their removal was legal, or if not, not subject to current judicial scrutiny? “ I do not want to enter into an argument about the legality or legitimacy of the presence of the Parthenon/Elgin Marbles in the British Museum since we know there are more than enough writings on this matter.

I shall still continue to read your excellent contributions and hope that this is an exception to your usual critical output. Kwame Opoku

Thanks for the comment, but I guess I don't understand how the comment you raise was all that controversial. I think the Greeks have a powerful ethical claim to the marbles, but do we really think that if they brought a claim in the High Court that an English court would order them returned to Greece? Far too much time has elapsed has it not? Limitations periods would certainly defeat the claim, even assuming that the original legal rights Lord Elgin had to them may have been lacking.

That's not to say the two parties can't come to some sort of collaborative agreement—though neither side seems keen to do anything of the sort.

I have to say I agree with Dr. Opoku. If the issue were as straightforward as you suggest, there would hardly be the rivers of ink devoted to it. The legality can be challenged on any number of grounds (did Elgin overstep the boundaries of the firman, etc.); but as you say, the legal aspect is only one piece of a very ethically (and, I would add, epistemologically) complex issue. Your comment is simplistic at best, and seems far below the level of sophistication your readers have come to expect.

There's nothing like ad hominem arguments in the morning...