A de facto confiscation of a work of art that arose out of a notorious exercise of man's inhumanity to man now ends with the righting of that wrong through the mundane application of common law principles. The mills of justice grind slowly, but they grind exceedingly fine. 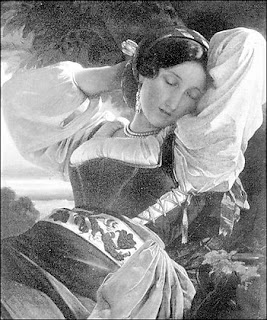 So concluded the First Circuit Court of Appeals in Vineberg v. Bissonnette.  It affirmed summary judgment for successors of an art dealer who lost this work to Nazi Spoliation.  The dispute was an appeal of Vineberg v. Bissonnette, 529 F. Supp. 2d 300 (D.R.I. 2007).  I briefly commented on the earlier district court ruling here.

The work is a 19th-century painting by Franz Xaver Winterhalter titled Girl from the Sabine Mountains.  It is valued at roughly $70,000 - $94,000 USD according to Ray Henry in brief AP story.  Katie Mulvaney also has a very fine overview for the Providence Journal.

The current possessor based her defense on laches, an equitable doctrine which essentially posits that it wouldn't be fair to allow the claimant to regain title to the work.  No luck for the current possessor however.  The opinion was not particularly kind to Bissonnette, perhaps because the appeal seemed thin on the merits.  In one passage Senior Circuit Judge Bruce M. Selya admonished the appellant "Proving prejudice requires more than the frenzied brandishing of a cardboard sword; it requires at least a hint of what witnesses or evidence a timeous investigation might have yielded" (emphasis added).  I must find a way to use that in conversation soon.

Well I don't really care too much about that, I guess if you buy something, in good way of course and it's a piece of 2000 years old, nobody has the right to take it away from you, doesn't matter the argument, if you work and pay for it it's yours.