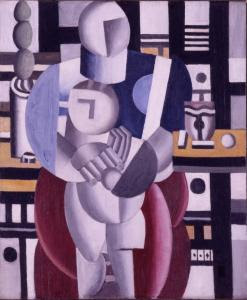 The Boston Globe today has the story of this work, Woman and Child by Fernand Leger which has been lost.

It seems the work was sent to Oklahoma City in 2006 for an exhibition which ran until April of 2007. The work was then sent back, but many of the loaned works "remained in crates for months because the Davis construction project was still underway". Then it seems the crate containing this work was "moved to a vault elsewhere in the building". And then in November administrators "discovered the painting was missing when they were compiling a digital catalog."

The story goes on to say the undisclosed insurance payout was paid. The work was perhaps thrown out or even stolen. Perhaps a little more care is required of multi-million dollar masterworks.
Posted by Unknown at 5:32 PM