Merryman on the Sevso Treasure (UPDATE) 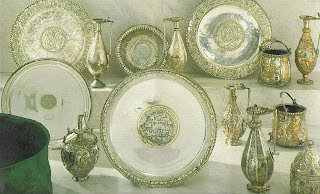 John Henry Merryman has posted a thoughtful, provocative, and surely controversial working paper on SSRN, Thinking about the Sevso Treasure.

Abstract. The Sevso Treasure is an example of what are frequently called “unprovenanced antiquities.” Establishment archaeologists claim that by acquiring and showing them collectors and museums encourage looting, while collectors and museum officials contend that since the works have already been looted, they serve the public interest better if held by a museum or a collector (who may lend them to a museum). The demand for antiquities responds to a normal human interest in acquiring, enjoying and showing them. That demand could be met by a flow of provenanced objects in a licit international market, but retentive source nations, supported by establishment archaeologists, drastically constrict the supply, and an illicit market is the predictable result. Establishment archaeologists’ misguided campaign to have unprovenanced antiquities considered illicit unless proved licit unacceptably reverses the normal order of proof and creates a probatio diabolica. A museum interested in acquiring the Sevso Treasure should be encouraged to do so.

It's extremely well-written as Prof. Merryman's articles invariably are. However he sends a shot across the bow of the archaeological establishment, who will surely be quick to respond. The subject of the article is the Sevso treasure, and unprovenanced antiquities. The idea of classifying them as looted until proven otherwise is what Merryman calls a "probatio diabolica" or devil's proof. He's right in a sense, however many or all of these objects are more likely looted are they not? It's a quick and lively read, but surely controversial.

He raises the critique first articulated Paul Bator in his seminal article, that much source regulation produces the opposite of its intended effect. He also argues source nations eliminate the possibility of a licit market in antiquities, using Greece as an example. These are important arguments, and cultural policy makers are still grappling with them. The response from the other side will no doubt be just as lively.

I have to express a bit of disappointment with the article, as it seems likely to further divide folks into the nationalist/internationalist camp, which would seemingly make meaningful discourse more difficult.

He does ask a meaningful question though, and its one without an easy answer: what to do with the treasure now? There has been a jury trial on the merits, and neither Hungary nor Croatia were able to establish ownership in a New York court. The Trust which now owns the treasure has very few options. Should it not be on display somewhere? The likely looting has already taken place. Punishment of the looters is impossible at this point. Is there not some value in displaying or studying the treasure somewhere?

David Gill has read the working paper now as well, and gives a thoughtful response over on his blog. He sees a potential contradiction:

But I find a mismatch in Merryman's approach. If he argues for our shared culture, does it matter if North American institutions (such as the AIA) and legal courts are in the forefront of protecting world ("cosmopolitan") heritage? Can North American import restrictions help to reduce the destruction of archaeological sites on, say, Cyprus?

Essentially the two have a fundamental disagreement about how best to proceed: should we construct a licit market, or attempt to prevent individuals from purchasing antiquities. The former would seemingly require a shift in source nation laws, the latter would have to fundamentally alter the market, perhaps ending it entirely. Neither seem to be particularly likely.
Posted by Unknown at 12:47 PM

My response to Merryman pointed to weaknesses in his discussion (e.g. the Biblical Archaeology Society position - "Statement of concern" - on publishing recently-surfaced archaeological objects) and surprising gaps in the literature. He also needs to revise his position in the light of the fact that pieces from four major private North American collections - two, Fleischman and Shelby White/Leon Levy were discussed in detail by Chippindale and Gill - have been returned to Italy.

And could there be a licit market for antiquities? It was a question I posed last August.

I hear about this in Viagra Online labs, and I really though on that moment, this guy it's a idiot, you buy things because you want for any reason but for the people know I have X thing... it's stupid.