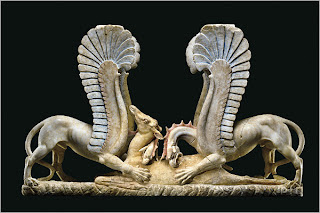 The Nostoi ("Returns") epic is mostly lost, but the bits and pieces which have survived indicate it tells the story of the return home of the Greek heroes after the Trojan War.

It is perhaps apt then that Italian authorities on Monday called the display "Nostoi: Returned Masterpieces" when they unveiled 68 antiquities which have recently been returned to Italy. Soon to join the list is the Euphronios Krater, which is slated for return from the Met in January.

Livia Borghese and Jason Felch have the story in the LA Times. Elisabetta Povoledo has a similar story in the NY Times, including a slide show by the AP and Italian Culture ministry. This image may be my favorite of the bunch, the Griffins attacking the doe. Objects were returned from the Getty, the Museum of Fine Arts in Boston, Princeton, and the Met. Also, some objects from the Royal Athena Galleries in New York were returned as well.

As might be expected, Francesco Rutelli the Italian culture minister and vice prime minister was quick to point out the significance of these returns saying, "The odyssey of these objects, which started with their brutal removal from the bowels of the earth, didn't end on the shelf of some American museum... With nostalgia, they have returned. These beautiful pieces have reconquered their souls."

Ultimately, the display shows the results of the Italian campaign which by necessity eschewed international law, and American law and instead went right to the heart of the matter using public pressure and the media along with the high-profile and ongoing trials of Marion True and Robert Hecht. At the press conference, Rutelli claimed that this strategy has "[brought] about radical changes in the trade of looted antiquities". That may be true in a limited sense I suppose, but only I think when the antiquities are backed by strong political will in source nations. What about the trade in antiquities from South America or Iran and elsewhere? I'm not sure this strategy will impact those objects. I'm not sure either that this new strategy will alter the idea of the Universal Museum, which seems largely at odds with the policy of many source nations. Ideally the Italian accords will continue to allow the US and Italy to work together to continue to share objects but also to prevent the acquisition of illicit antiquities in the future.

Sarah Delaney has more in yesterday's Washington Post, with more pontificating by Rutelli including this: "if we dry up the waters of illegal art trafficking it will be much more difficult for tombaroli and others to operate." He praised as well the "new standards of ethics that American museums have adopted". First among these is the Getty's stringent new acquisition policy. Also, museums who cooperate will earn continued loans.

David Gill has more on the official handlist of objects in the display, including where objects came from, and a breakdown of the type and composition of objects. As he points out, "15 pieces were represented by South Italian pottery."
Posted by Unknown at 7:24 AM

WHILST I SHARE MOST OF THE SENTIMENTS OF DAVID GILL,I AM NOT SURE IN WHAT SENSE HE IS USING THE WORD "ESCHEW" WHICH I UNDERSTAND TO MEAN "AVOID".IS HE SOMEHOW SAYING THAT THE ITALIANS AVOIDED INTERNATIONAL LAW,IMPLYING THAT IF INTERNATIONAL LAW WERE APPLIED,THE ITALIANS WOULD HAVE LOST THEIR CASE? INTERNATIONAL LAW,INCLUDING THE VARIOUS CONVENTIONS AND RESOLUTIONS OF THE UN AND UNESCO SURELY IS ON THE SIDE OF THE ITALIANS. IAM AWARE THAT MANY JURISTS IN THE WESTERN WORLD,FOR GOOD REASON, ACT AND TALK AS IF THERE HAD BEEN NO DEVELOPMENTS IN INTERNATIONAL LAW SINCE THE HEYDAYS OF WESTERN IMPERIALISM. IN ANY CASE,IF INTERNATIONAL LAW OR AMERICAN LAW WERE IN FAVOUR OF THE AMERICAN MUSEUMS,WHY DID THEY NOT SUBMIT THEIR CASES TO AN INTERNATIONAL TRIBUNAL AUTHORIZED TO APPLY THOSE LAWS? THE WESTERN COUNTRIES WILL BE THE FIRST TO OBJECT TO SETTING UP AN INTERNATIONAL TRIBUNAL TO ADJUDICATE IN SUCH CASES.
I BELIEVE THAT THE EXAMPLE SET BY THE ITALIANS AND THE AMERICAN MUSEUMS IS LIKELY TO AFFECT THE ILLICIT TRADE AND ALSO THE PENDING CLAIMS OF THE AFRICAN AND ASIAN COUNTRIES IN RESTITUTION CASES. WE SHOULD CONGRATULATE THE MUSEUMS AND THE ITALIANS AND ENCOURAGE OTHERS TO FOLLOW THEIR EXAMPLE WITHOUT THROWING ANY DOUBTS ON THE RESULTS.FRANCESCESCO RUTELLI IS SURELY RIGHT WHEN HE THINKS WE ARE ON THE VERGE OF A NEW EPOCH.MANY COUNTRIES ARE WAKING UP TO THE ILLEGALITIES AND INJUSTICES IN THIS AREA.
DR.KWAME OPOKU

Dear David Gill,
Many thanks for the references which I found useful.Best wishes,Kwame Opoku.