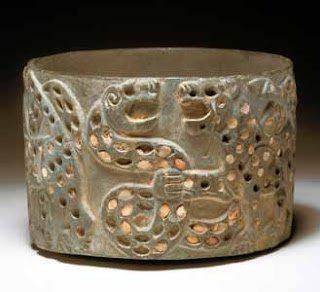 The judgment in Republic of Iran v. Barakat Galleries [2007] EWCA Civ 1374 has been released today. At the High Court, Gray J decided in favor of the gallery because, first and foremost, the ownership declarations Iran relied on were in his eyes insufficient. The Court of Appeal reached the opposite result by holding that a claim for conversion is tenable so long as the various rights granted to Iran amount to an ownership interest under English law. Pictured here is a chlorite vase on the Barakat Gallery website, of the "intercultural style" similar to the objects now recovered by Iran.

At issue were "eighteen carved jars, bowls and cups made from chlorite. Iran alleges that they date from the period 3000 BC to 2000 BC and originate from recent excavations in the Jiroft region of Iran which were unlicensed and unlawful under the law of Iran."

i) Whether under the provisions of Iranian law pleaded in the Amended Particulars of Claim, the claimant can show that it has obtained title to the Objects as a matter of Iranian law and if so by what means, and

ii) If the claimant can show that it has obtained such title under Iranian law, whether this court should recognise and/or enforce that title.

The Court of Appeal answered both in favor of Iran.

This also was a conclusion which the judge described (para 100) as "a regrettable one", and added (presumably not having been informed that the United Kingdom had ratified the UNESCO Convention) that the answer might be the one given by Lord Denning MR in the Ortiz case, namely an international convention on the subject.

Importantly, the Court of Appeal noted that "it is important to bear in mind that it is not the label which foreign law gives to the legal relationship, but its substance, which is relevant. If the rights given by Iranian law are equivalent to ownership in English law, then English law would treat that as ownership for the purposes of the conflict of laws." At issue was whether Iran's rights were sufficient to give it a claim for conversion under English law. The distinction from the lower court turns not on the legal significance of a proclamation such as "Iran declares itself the owner of all undiscovered antiquities"; but rather in the individual rights which Iran has given itself in these objects. If the sum of these rights amounts to ownership under English law, then Iran has a viable legal claim. As the Court of appeal noted in para. 80:

We consider that this is an arid issue. Given our conclusion that the finder did not own the antiquities (and the fact, as was common ground, that the owner of the land from which they came had no claim to them), there are only two possibilities. Either they were "bona vacantia" to which Iran had an immediate right of possession and which would become Iran's property once Iran obtained possession and which could not become the property of anyone else or they belonged to Iran from, at least, the moment that they were found. We consider that the former alternative is artificial. Iran's personal rights in relation to antiquities found were so extensive and exclusive that Iran was properly to be considered the owner of the properties found.

The question then became, under English law does the Iranian interest in the objects support a claim in conversion, and if so is the claim founded on a penal or public law? The relevant 1979 Legal Bill was not penal with respect to ownership of antiquities, though other segments dealing with criminal penalties for unlawfully excavating or dealing with antiquities may have been. The court, distinguishing between export restrictions and asserting ownership. The former is clearly a public law and unenforceable ablsent another treaty obligation while the latter is justiciable. When a state owns property in the same way as a private citizen "there is no impediment to recovery." King of Italy v de Medici (1918) 34 TLR 623.

Though the court did recognize difficulty in enforcing Iran's sovereign authority, the Court of Appeal classified the claim as a "patrimonial claim". In distinguishing this claim reference was made to US precedent, United States v Schultz, 333 F 3d 393 (2d Cir. 2003) in which the Second Circuit recognized an Egyptian patrimony law even though Egypt had never reduced the objects at issue to possession. Importantly, the Court of Appeal reasoned that even if it was wrong in not characterizing the claim as the enforcement of foreign public law, the claim would still not be barred because there exists no "general principle that this country will not entertain an action whose object is to enforce the public law of another State." In supporting this principle reference was made to the UNESCO Convention, the UNIDROIT Convention, the Commonwealth Scheme (which has not apparently been fully implemented), as well as the relevant EU directives.

The appeal is a tremendous gain for source nations, and establishes English courts will in fact recognize foreign ownership declarations even when they are not explicit, so long as they grant rights to the source nation similar in nature to ownership requirements under English law. In the initial AP news story Fayez Barakat the owner of the gallery indicated "This means that the Iranian government could claim every Persian item at a British Museum, and that doesn't make any sense". He's right that it doesn't make any sense, because its patently ridiculous, and indicative of the ridiculous exaggerations which often occur after a ruling like this. The British Museum will not be emptied of its Persian collection because of this decision; rather antiquities dealers are unable to sell new and illegally excavated objects from Iran.