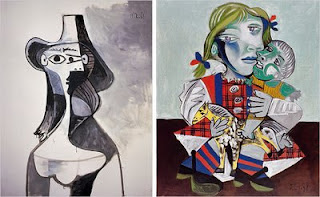 Police have recovered 3 important works by Pablo Picasso stolen from the home of the artist's granddaughter in February. These two canvases-- Portrait de femme, Jacqueline pictured on the left and Maya à la poupée on the right. Another drawing, Marie-Thérèse à 21 ans was recovered as well. Details of the February theft are available here.

Three suspects have been arrested. In February police estimated the drawings may have been worth as much as $66 million. It seems the suspects were shopping the works to art dealers, and one of the dealers contacted French police. The suspects would have had a very difficult time selling the works, as they are widely known. Hopefully there will be a similar recovery of the works stolen from Nice on Sunday.
Posted by Unknown at 5:03 AM