I'm not sure who is editing the New York Times Sunday Review, but this Sunday's piece by Hugh Eakin contained a stunning array of factual inaccuracies. To pick a passage:

Since 2006, more than 100 statues, bronzes, vases, mosaics and other works have left public collections in the United States. Among them was the Euphronios krater, depicting a scene from the “Iliad,” which awed visitors to the Met for decades, and a rare limestone and marble statue of a Greek goddess, which the Getty purchased for $18 million in 1988. In nearly every case, the museums have not been compelled by any legal ruling to give up the art, nor are they receiving compensation for doing so. And while a few of the returned works have been traced to particular sites or matched with other fragments residing in the claimant country, many of them have no known place of origin. 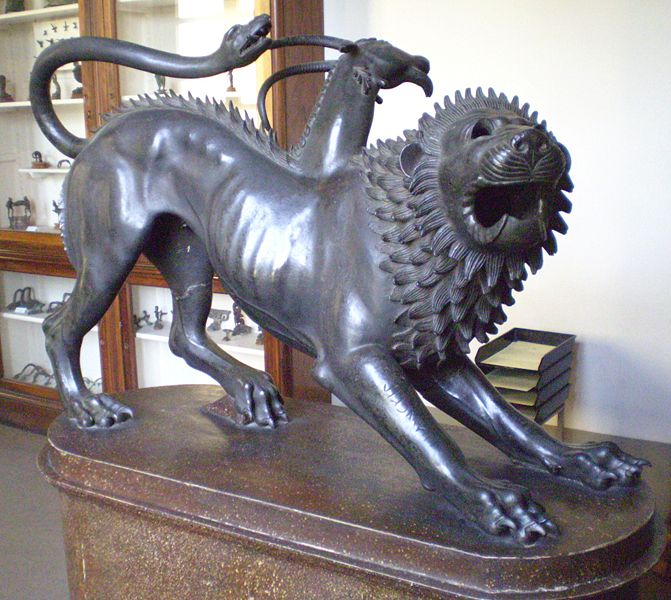 Eakin may not know, but these returns, particularly from the Getty, were accompanied by corresponding loans heading in the other direction. The bronze "Chimera of Arrezzo" is hardly nothing.

No mention is made of breaking up the once-called "Getty Goddess" to transport in the trunk of a car; nor the destruction of context. Having seen a looters pit and visiting these sites must I think cause any thinking person to change his or her views of the proper place for looted objects. Moreover, museums are repositories of works of art and cultural objects, but not at the expense of the rule of law. Eakin's false claim that these objects were not returned with the benefit of a legal ruling breezes over the unassailable fact that many of these institutions have been challenged in court, and in many cases museums return objects well in advance of a legal ruling or claim lest their own curatorial staff be subject to criminal prosecution in the United States or abroad. Not every return can be so casually dismissed as museums making up evidence of theft and looting. It would be a bizarre legal system that said that so long as a murder occurs and the perpetrator can hop off to another country, the defendant should get off free and clear. But that's the casual indifference displayed by Eakin. Here are a few other reactions.

Lynda Albertson, ARCA CEO notes that Eakin hasn't been speaking with anyone in Rome:

Having just spent last Thursday, January 24th at the round table symposium at the Villa Giulia hosted by Alfonsina Russo, Superintendent Archaeologist for Southern Etruria, in reviewing the work conducted in these contentious cases over the last 15+ years I can assure you that extortion is not, nor has it ever been, a nefarious motive in seeking the return of Italy’s looted antiquities. Italy’s motive, if it can be summed-up in a simple statement, is to preserve and protect the country’s antiquities for all its generations and in doing so, by recording objects in their discovered contexts, expanding upon our knowledge of the ancient world.

He suggests that foreign governments have been threatening legal action over the return of antiquities. But I suspect that major museums have been secretly relieved to avoid that course of action. I do not know if Eakin has seen the photographic and documentary archives, but the thought of this material being unpacked in a courtroom where every image would be analysed in the media is one that would probably make the blood of most museum directors run cold. It is sufficient to say that Italy has probably claimed less than 1% of the objects in the photographic archives. This suggests great restraint, understanding and flexibility from the Italian authorities. But it also calls for flexibility from the North American museum community.

Waiting for a court order to demand the repatriation of stolen or smuggled artifacts when potential settlement options are available disrespects the rule of law and undercuts a museum’s reputation. Attorneys, museum directors and trustees, museum donors, the general public, and the courts likely would not support the courtroom clashes resulting from "The Great Giveback's" call to legal arms. Museums are highly respected, and there is an expectation that they will "do the right thing" by finding acceptable legal solutions before initiating or inviting litigation that might result in the forced return of stolen or smuggled property.

Lee Rosenbaum also notes the problems with reality in Eakin's argument and rightfully argues it should have been ignored had it not graced the pages of the Grey Lady on Sunday:

Since Eakin has extensively covered the Cultural Property Wars in pieces for many publications, his misstatements and distortions regarding repatriations are likely to have been either deliberate or indicative of how much he has forgotten about what he once knew. A third possibility is that he is prone to blanket statements that he believes to be true but hasn’t adequately researched.

A sample of some other essays from my own files demonstrate Eakin's view has changed very little:

Email ThisBlogThis!Share to TwitterShare to FacebookShare to Pinterest
Labels: repatriation

The Eakin piece is a confirmation that there are still many highly educated and uneducated persons in Western countries who do not understand or accept that taking or holding the property, including cultural property, of another, is wrong. That there is not only a legal but also a moral obligation to return stolen or looted artefacts appears complicated for some.

I used to think that the New York Times was a paper of the US American elite. Is that how their minds work? I would have thought that we should all now praise the American museums, like the Getty, the Met, Dallas Museum and others that have seen the light and are now willing to examine their past acquisitions and where necessary, return wrongfully acquired artefacts to the owners. Eakin seems to think the museums have returned too many objects and have been weak in resisting foreign pressures.

Does Eakin not read regularly the New York Times and other American papers and blogs? He would have been aware that the US Museums have not simply returned artefacts on request but have resisted for years. He would also have realized that there are thousands of objects in US museums that are still subject to dispute. What leadership does Eakin and his paper hope to provide?

It is surprising to read from “A Short Message About Museums And Antiquities” by Judith Dobrzynski in artifo.com that those who are reclaiming their stolen or looted cultural artefacts are committing extortion. Can the author really mean that a goverment such as that of Turkey, by stating that it would not loan artefacts to those museum holding illegally Turkish artefacts, is committing extortion? Extortion, according to normal usage, implies the use of force or intimidation to obtain money or other advantage which one could not normally be entitled to. I know of no case where this would apply to those who demand the return of their property. One could as well say that a bank that refuses to make further loans until the earlier ones are paid, is committing extortion. But this is not normal understanding of the word.

“Meanwhile, the looting that these cases were supposed to stop has gone on, possibly getting worse.” I do not recall anyone suggesting that the restitution of looted/stolen object would stop looting. Which government presented the cessation of looting as ground for requesting restitution of an art object?

How can anybody, familiar with the situation regarding the recent restitutions by US American institutions, consider the views expressed by Eakin as reasonable? He is suggesting that the American museums have gone too far in restituting looted/stolen foreign cultural artefacts. Is this what you consider a reasonable position? We know that there still many more such artefacts that have not yet been returned to their countries of origin as the United Nations and the UNESCO have been urging for decades. The recent General Assembly resolution on return of cultural property, sponsored by more than 100 States, including the United States, urged the return of such cultural objects.

The last quotation is simply amazing “But in zealously responding to trophy hunting from abroad, museums are doing little to protect ancient heritage while making great art ever less available to their own patrons”. To describe Italy, Turkey, Greece, Nigeria, Peru and other States seeking the return of their looted/stolen cultural artefacts as trophy hunters