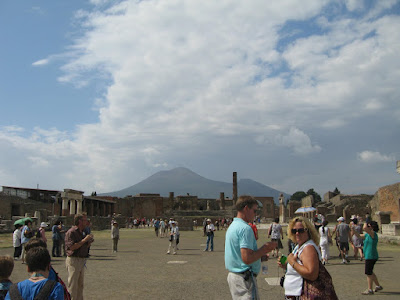 Martin Bailey for the Art Newspaper reports on UNESCO taking the initial steps towards putting Pompeii on the World Heritage in Danger list. A report published in June (to little fanfare) found that:


Although much of Pompeii ­remains in good repair, the problems are numerous, including “inappropriate restoration ­methods and a general lack of qualified staff… restoration projects are outsourced and the quality of the work of the contractors is not being assessed. An efficient drainage system is lacking, ­leading to water infiltration and excessive moisture that gradually degrades the structural condition of the buildings as well as their decor. The mission was also concerned by the amount of plant growth, particularly ivy.” . . . Pompeii attracted more than 2.3 million visitors in 2010 and on the busiest days it had 20,000. Sheer numbers, along with careless behaviour, are causing considerable damage: “Visitors in groups rub against the decorated walls, all too often with their rucksacks, or lean against them to take the best possible photographs,” says the report.


That has been my experience on visiting Pompeii as well. Do people need to touch and scramble over everything? On visiting the site, perhaps the calls by some to just bury parts of the site, and leave open only those areas which can be properly managed and visited is the right answer. I was surprised to learn that in 1956 there were 66 restored houses open to visitors, but today only 15 are open, and these are badly damaged by ignorant tourists and inefficient security.

There has been €105m set aside by the European Union, and a UNESCO 'action plan' could enable that money to be spent. However the funding cuts at UNESCO which resulted from the unfortunate decision on the one hand by the U.S. to cut all UNESCO support, and second, but UNESCO member states and Palestine to force the political brinksmanship may put that funding in jeopardy.

Thank you for your posting. It seems that you and the report blame tourists for conservation and site management problems. Obviously, we cannot encase the site in glass, but we should not cut it off from the world. People are interested in seeing this piece of history and we are preserving it for the public good, not just for elites and academics. To deny the public access to this site would be a grave shame and I believe that as a UNESCO world heritage site it should not do this. Have we become so discouraged by the fact that the ravages of time will eventually destroy tangible artifacts and monuments that we need to fence in and hide away every part of our culture? While, I have also been aghast at Pompeii's continued destruction, I would advocate educating "ignorant tourists" rather than cutting off the few people who are willing to invest in heritage and visit archaeological sites.

I think anyone who has seen the way Pompeii is treated on a busy day, with loads of tourists recognizes there are lots of problems with the way the site is currently managed. Too many visitors visiting too few parts of the park, with inattentive and passive security guards.