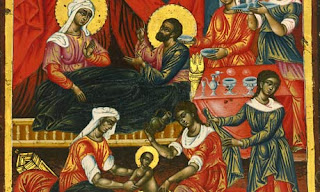 Six stolen Byzantine-style icons have been discovered in London near the Greek embassy.

The plundered art was revealed after a telephone call from a woman claiming to recognise one of the icons – a famous rendition of the Virgin – on the website of the Temple gallery in west London.
Further investigation showed that the immaculately preserved gold-edged painting was among six icons reported missing from Greece that the specialist was selling for up to £5,000 each.

Richard Temple, who owns the gallery and is acknowledged as London's foremost dealer in icons, said that when he bought them he had "absolutely no reason" to suspect they were stolen.

"I've been in the business for 51 years and I'm too well known as a gallery to take any risks at all," he said. "We are an obvious target. We had gone through the correct protocols, but one has to have a certain amount of trust as business is conducted in good faith. I know the seller – he is somebody I deal with and I think he, in turn, was duped."

Upon presentation of documentation showing them on display in Greece, the art dealer voluntarily gave up his rights to the icons last week. "They left last Thursday in the hands of Scotland Yard," he said. "It was very painful and unfortunate."

So Mr. Temple blames the sale on another unnamed dealer, who was also "duped". Another unfortunate example of incomplete history. If the dealer was in fact duped he would have a remedy against the unnamed dealer.