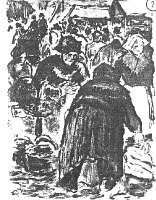 A federal jury has ruled that this Pissaro painting, "Le Marché," was stolen from the Faure Museum in Aix-la-Bains in France.  The work was seized by ICE agents from Sotheby's in 2006, after its theft in 1981.  The thief took the work from the museum under his jacket.  The work has a storied history as the Department of Justice Press Release describes.

It seems that in 1985 the thief, Emile Guelton, sold the work to Sharyl Davis who was using space art gallery in San Antonio owned by Jay Adelman.  Mr. Adelman seems to operate an antiques shop on the Riverwalk, and operate a website.  In 2003 the work was consigned to Sotheby's by Davis.  Davis paid $8,500 for the painting in 1985, and estimated an auction price of $60-80,000.  However Sotheby's asked about the history of the work and was told it was purchased from someone named "Frenchie". But then Davis asked for "Frenchie's" real name from Adelman, who told her it was Guelton and that he was from Paris.  That information appeared in the auction catalog with an image of Le Marché."

Just before the auction, French federal law enforcement officers learned that Le Marché was at Sotheby's. Based on the information in the auction catalog, the French officers located, contacted, and interviewed Guelton. Guelton confirmed that he knew Adelman, was living in Texas in 1985, sent a container of artwork from France to the United States in 1984, and sold Adelman paintings. The French officers, using a prior arrest photo of Guelton, created a six-person photo array, which they showed to the Faure Museum guard in October 2003.

The Pissarro was then forfeited under the National Stolen Property Act.  Forfeiture allows prosecutors to bring a suit against an object which was part of a crime, and all claimants to the object come forward to challenge the forfeiture.  It is a powerful tool for prosecutors, and thus should be used carefully, else we may risk losing works of art for many years.  It seems like the right result was achieved in this case.  Mark Durney rightly points out that this round-about story reveals a lot about how difficult recovering stolen art is and how easy it is to acquire in "good faith".
Posted by Unknown at 5:54 PM

This is the good blog with good images and good details. Please keep on posting the more stuff. I will like to hear more from you.