At the ARCA Conference in Amelia back in July, Francesco Rutelli gave a very interesting talk elaborating in some detail on the wave of repatriations from many museums to Italy; and of course this resulted in many North American museums and even a collector returned works of art to Italy. The Met, the MFA Boston, the Getty, the Cleveland Museum of Art, Princeton University, and Shelby White have all returned important antiquities to Italy.

Some have questioned whether these repatriations have been worth all the negative publicity, particularly if the nation of origin cares little for the returned objects. At the conference, I asked Rutelli about that, about how some have argued that Italians don't seem all that interested in the return of the Euphronios Krater and how not many people are visiting it. He responded with what I thought was a pretty thoughtful answer. He stated that the piece is in "the correct place" and that in "scientific terms it is correct". It is an Etruscan object, and the Villa Giulia is the Etruscan museum—arguing that if the piece had been properly and legally excavated from Cerveteri, this is where the piece would have been displayed. He did acknowledge though, that there may have been problems with "publicity and information", a problem he traces to the current government, which he argued "should do more", and these repatriated objects should all be displayed together as part of a meaningful message.

Rutelli finished his talk by providing a number of documents to ARCA Director Noah Charney, and I've had a chance to scan some of them (some of the same pictures also appear in a piece by Suzan Mazur for Scoop). 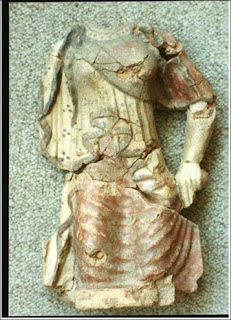 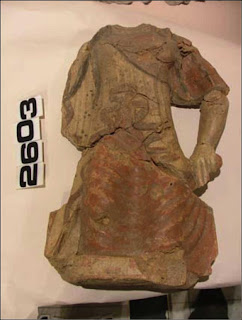 The image on the left is a picture of a terracotta relief from the Symes collection, the picture on the right is a photo seized from Giacomo Medici. The resemblance is striking, and they indicate, if Medici had a polaroid of the object over a decade ago; it was very likely looted.


There are more documents and photos embedded below, but first a little background. The impetus for the recent returns was the criminal investigation of Giacomo Medici, whose conviction was upheld in July. When Medici's Swiss warehouse was searched, it produced a number of Polaroids of works of art which ultimately wound up in the United States and elsewhere. Italy has been engaged in a concerted effort to seek the return of many of these objects. Rutelli argued that these returns were not on "nationalistic terms" a rebuke to the criticism of Jim Cuno and others who have criticized the repatriations. Rutelli argued they were "fighting to recover some masterpieces" and that Italy did the same when other countries discovered other stolen works of art in Italy. He said the effort was motivated by the "context of archaeology", adding that "when you enter a museum you should be sure that these objects are clean".

One of the individuals Rutelli focused on during his presentation was Robin Symes. Symes is a former antiquities dealer who has served 7 months in prison in the U.K. for perjury. Roberto Conforti, former head of art recovery for the Carabinieri has been labeled "the core" of the illicit antiquities trade for a period, and "everyone's boss". He was "once the prince of the ancient art trade." But those days have long since passed. There are a number of indications he had a very close relationship with Giacomo Medici, Robert Hecht, and even Marion True. As a consequence, any antiquities which have been handled by Symes may likely have been looted. Rutelli revealed in July that the Italian government had attempted to reach an agreement withe the U.K. authorities over the Robin Symes collection. They had included photographs and other evidence, and in total some 1,000 pieces were requested from the estate of the now-bankrupt Symes. However the Italians were not able to secure a return of the objects, which was a "failure in criminal court". Rutelli noted that these objects have no likely purchaser, someone "could buy them, but they shouldn't". Despite this photographic evidence, it seems unlikely any scrupulous buyer would purchase these looted objects. Indeed it is troubling that the Italians continue to have such difficulty seeking the return of these objects. Such is the state of the antiquities trade.

Embedded below are some of the documents Rutelli provided at the conference on July 11th. The first three pages are in English, while the rest are in Italian. They reveal I think the tremendous difficulty Italy has had in seeking the return of these objects, even in the face of clear and convincing photographic evidence. How can these objects from the Symes collection not be returned?

Rutelli Looted Antiquities Documents Provided to ARCA
Posted by Unknown at 5:30 AM