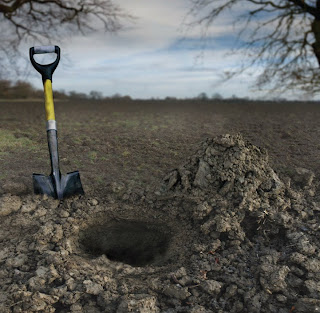 The long-awaited report upon the impact of illegal metal detecting ("nighthawking") conducted by Oxford Archaeology on behalf of English Heritage, is now available from  the Historic Environment Local Management website.  It appears that illegal metal detecting in England has declined since 1995, the point at which soon after, in 1997, the Portable Antiquities Scheme first began its efforts.

Ownership declaration is an important legal strategy undergirding the protection of heritage; but this declaration in isolation does not necessarily create the best cultural heritage policy. Effectively guarding every archaeological site is impossible given limited resources. The looting of corresponding sites elsewhere in the World, particularly in North and South America is a travesty and presents a foudational problem with heritage policy. One potential solution is a policy framework and network of PAS-style liason officers. That's not to say that these states should encourage metal-detecting, but the efforts of the PAS have appeared to substantially decreased looting and illegal activity.  Education and outreach, even if it means compromise, are essential. Outreach and education is badly needed.

The PAS works in conjunction with the law, which was of course a compromise postion between heritage advocates and landowners. A very strong legal regime may in a perfect world be the best policy. But what good are they if they aren't meaningfully enforced? In the heritage context, the PAS and metal detectorists are producing contextual information. It's a different kind of information, which we can characterize as shallow but extremely broad; rather than a thorough documentation of sites which might be narrow but very deep.

The most interesting revelation of the report is the suggestion that metal detecting has substantially decreased since the PAS began.  In 1995, 188 scheduled monuments were reported damaged; in 2008, that number was 70.  In 1995, 74% of archaeological units reported their sites had been molested; in 2008 that number is 28%.  I take that as pretty strong support for the proposition I argued for in my recent piece on the Portable Antiquities Scheme, A Coordinated Legal and Policy Approach to Undiscovered Antiquities: Adapting the Cultural Heritage Policy of England and Wales to Other Nations of Origin, IJCP (2008).


Despite the overall decrease, the report still argues the criminal penalties remain insufficient, and the local enforcement officers and the Crown Prosecution Service need to do more to ensure individuals caught violating the law receive suitable punishment.  At present the maximum penalty is three months in prison and a £1,000 fine.

The report provides a number of other key points:

Has it? It is reported that only 1 in 7 farmers affected report the matter since they feel little will be done. Since figures on this were not provided in 1995 it is hardly safe to say the activity has reduced since then.

"but the efforts of the PAS have appeared to substantially decreased looting and illegal activity."

Have they?
By what mechanism? Education and outreach? Are criminals open to dissuasion? Are burglars? It seems to be a claim without credible substance.

In addition, it rather looks to me as if there is a correspondence between the peak nighthawking regions and the regions where PAS outreach is most intense. Quite the reversew of what might be expected if PAS was a determining factor.

Finally, the report says that nighthawking is virtually unheard-of in Northern Ireland. There, legislation has been applied, metal detecting is subject to licensing and being out in a field with a metal detector will prompt the question of whether the person is licensed and posessing or selling freshly dug artefacts will prompt the questions of whether they have been presented to the Dept of the Environment in accordance with the law.

If we are to draw any conclusions about what "works" regarding preventing nighthawking I would have thought Northern ireland was a much more compelling place to look for evidence.

It would be nice if they said something nice about detecting. its getting on my nevers and giving us all a bad name. nighthawking is bad.
87% of people record there finds