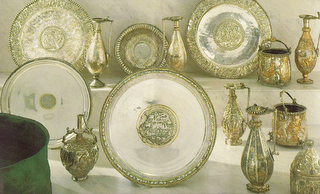 For the last week, the infamous Sevso treasure has been on display in Bonham's auction house in London. The New York Times devotes an article in its art section to the exhibition. The private exhibition marks only the second time the 14 silver objects have been displayed, and its not even open to the general public. Some estimates value the 14 sculptures at $187 million. The last display occurred in new York in 1990. The silver objects are roman in origin, and are believed to date from 350 - 450 A.D.

Despite their beauty, the antiquities are marred by controversy. This week's display was certainly made in anticipation of an eventual sale. However, the location, archaeological context and provenance of the find remain unknown. We do know the Marquess of Northampton acquired the objects in the early 1980's. In 1983, 10 of the objects were offered for sale to the Getty museum, however the sale fell through because the export licenses were falsified.

One of the difficulties with these items is that their origin remains a complete mystery. Though certainly Roman in origin, Lebanon, Croatia, and Hungary have all made claims on the objects. There was a lengthy series of legal proceedings. After a 7 week trial in 1993 in the New York Supreme Court (the court of general jurisdiction in New York) a jury found that neither Croatia nor Hungary had established a valid claim over the treasure, and the Marquess of Northampton retained ownership.

The exhibition and potential sale have caused quite a stir already. In the London Times, Lord Colin Renfrew, former director of the McDonald Institute for Archaeological Research argued that the display of the works by any UK museum would be unethical, and "It is an affront to public decency that a commercial dealer should do so - even if many archaeologists such as myself, will take the opportunity of going to inspect it." The problem of course, is we know the objects are Roman, but not which part of the former Roman empire they were discovered in. Hungary and Croatia both feel strongly about their claims, but they are unable to establish concrete ownership.

There has been an atmosphere of reform in recent years in the UK, with accession to the 1970 UNESCO Convention, the Ministerial Illicit Trade Advisory Panel, the Parliamentary Inquiry in 2001, and the new Dealing in Cultural Objects (Offences) Act 2003. How the UK government will respond to the trade in these objects, which was undoubtedly the result of an illicit excavation should be interesting to watch unfold.
Posted by Unknown at 7:08 AM