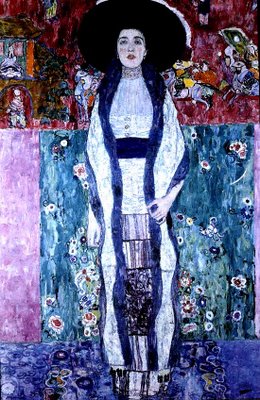 An auction of Impressionist and other modern works in New York next month may become the most lucrative art auction ever, The Times Online reports. The November 8-9 auction could fetch $490 million. Four Klimts, including Adele Bloch-Bauer II (pictured here) are for sale, as well as a blue-period Picasso. The Times reports that the art market has not been this active since 1990.

The Klimts are from the Altmann collection, which was recovered from Austria last year after an arbitration ruling granted the heirs of Adele Bloch-Bauer the five pieces after a 7-year legal battle. The New York Times gives a background of the dispute in its story about another Bloch-Bauer portrait which fetched a record $135 million. When Germany annexed Austria in 1938, Bloch-Bauer fled, leaving all his possessions behind, and for the last 60 years, the works have hung in the Austrian National Gallery.

The legal dispute even reached the US Supreme Court, in Republic of Austria v. Altmann. That decision upheld lower court rulings which involved the 1976 Foreign Sovereign Immunities Act, which grants foreign nations immunity from suits in US courts. The Court upheld an exception of FSIA which allows suits when property has been taken in violation of international law.

The Klimts are exceptionally valuable, and certainly Mrs. Altmann has an excellent claim to the works. However, in terms of the general public, do these works belong in Austria, where they were commissioned? Or are they just as worthy of hanging in a museum in the US? The question is moot I suppose, because the works are Mrs. Altmann's to dispose of as she pleases. But are the works Austrian in character, such that they can only be fully appreciated in Austria? I think not. These are the arguments some antiquities experts make though in support of the return of antiquities to their source nation. I guess I'm not really sure why the argument should be any different between art or antiquities.