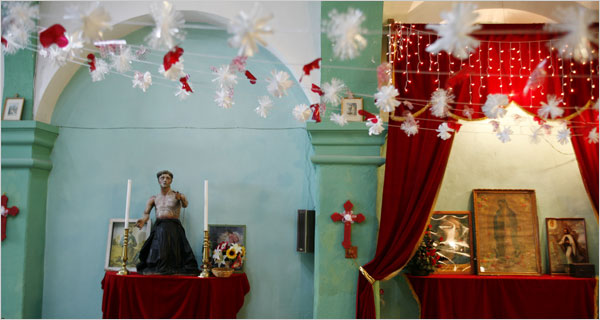 In today's New York Times, this piece details the theft of colonial art from Mexico's rural churches. Apparently, theft from churches in Mexico's colonial heartland near Mexico City has become widespread. According to the National Institute of Anthropology and History in Mexico, 1,000 colonial pieces have been stolen since 1999. In response, the Mexican government is attempting to register the nation's sacred art. According to the Times piece, 600,000 items have been inventoried so far. The institute is also preparing its own Web site of stolen art, so dealers and collectors can no longer claim that there is no record of the theft.

Such a database is both a welcome change, and worrying at the same time. In theory, a database should put dealers of Mexican colonial art on notice that a certain set of objects may be tainted. However, there are a number of such websites now available. See the Art Loss Register for example. The more of these databases there are, the harder it will be for the law to realistically impose an obligation on buyers and sellers of art and antiquities. If each segment of the cultural property market has its own database, this would almost certainly lead to confusion and overlap. One unified website would be a much better system. A buyer or seller could easily check a single website t insure their piece is not stolen.
Posted by Unknown at 9:21 AM