Looting From Iraq: A Better Perspective 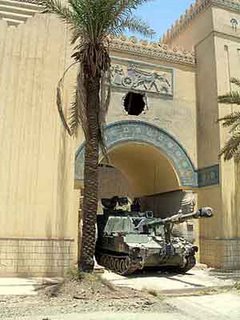 I'd like to devote some time today to the issue of looting following the invasion of Iraq in April, 2003. Specifically, I'd like to point out the perspective of Colonel Matthew Bogdanos, a Manhattan District Attorney, classics scholar, and Marine who led a specialized multi-agency task force. Immediately after the invasion, countless news agencies and press reports claimed that 170,000 Iraqi antiquities had been stolen while American forces stood by and let things happen. Bogdanos has recently published a book about his exploits, Thieves of Baghdad, and has also written scholarly articles, including this one from the American Journal of Archaeology.

Much of the recent book details his personal experience as the son of Greek immigrants in New York, his decision to study classics during his time in law school, and also his experiences near ground zero on September 11, 2001. He is passionate about his service in the marine corps, and about his mission in Iraq, which may put some readers who are critical of the war and the invasion ill-at-ease. However, Bogdanos remains candid throughout, pointing out the struggles of marines in Iraq in dealing with the media, tribal leaders, and even western misconceptions.

The strength of Bogdanos' account of the looting of the Baghdad museum is the way he brings a prosecutor's attention to detail to the whole controversy. He creates a time line, and gives his opinion as to what the US military should or should not have done at various times during the invasion of the city of Baghdad.

In my view, a lot of commentators took their anger at the invasion, and turned it into blind criticism of how the military should have protected these antiquities . After reading Bogdanos' account, clearly mistakes were made, but not to the extent that initial reports indicated. The Baghdad museum itself was rarely open to visitors under Saddam Hussein. In fact, American troops would have likely done more harm to the objects in the museum if they had been more robust in capturing the museum earlier, as there were Iraqi troops inside the museum. This picture shows a hole left by an american tank which was being fired upon from the archway. Granted, there are many arguments against the US-led invasion of Iraq, and the loss of Iraqi cultural heritage is a shining example of what went wrong, just not to the extent initially reported.

Who exactly looted the museum remains unknown for sure, but the US military's policy of amnesty for the return of objects helped to bring back a number of priceless artifacts, including the sacred vase of Warka, which is 5,000 years old and considered one of the oldest existing sculptures. Unfortunately many priceless objects are still missing, and are on the FBI's most wanted art thefts list.

In the end, after reading Bogdanos' account, the tragedy of recent Iraqi history becomes manifest. This is the cradle of civilization; unfortunately now it is the location of a great deal of violence. Sadly, the recent death estimates which exceed 600,000 illustrate this.
Posted by Unknown at 6:07 AM