Praise for the Stair Gallery 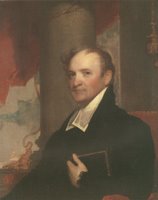 Stair Galleries, a small gallery in Hudson, New York has discovered that it was auctioning works which may have been stolen from Harvard University in 1968. The painting, similar to this portrait of 19th century Harvard President, and founder of the law school, John T. Kirkland. The work resembles this portrait by Gilbert Stuart which sold for $182,000 this summer in Manchester, New Hampshire (pictured here).

However, it appears that the work may not be an original Gilbert Stuart painting, according to the Harvard Crimson. The painting was sold for $7,500 last week, as a part of the estate of William M. V. Kingsland. Kingsland had no heirs, and no will. The distribution of his estate was in the charge of a public commissioner, which commissioned the items to Christie's and Stair galleries to auction the objects.

Colin Stair, the president of Stair galleries, halted the sale of 250 objects from the Kingsland estate. The FBI has been investigating the sale, to determine if any of the works have been stolen. A dealer who purchased paintings was the first to discover that one had perhaps been in the Harvard collection in the 1960's.

Details are still a bit sketchy, and the only reporting on this I have found has come from the Harvard Crimson. It raises some issues though. What database were being consulted. Did they check the Art Loss Register, or another? Was the work published in these databases? If anything it highlights the need for a single database, and a need to publish these stolen databases for everyone.
Posted by Unknown at 4:21 AM