James Cuno to head the Getty

Dr. James Cuno, a noted writer on cultural policy and a firm supporter of universal art museums and the movement of art has been named the next President and CEO of the Getty Trust:


LOS ANGELES—The Board of Trustees of the J. Paul Getty Trust announced today that James Cuno, recognized both nationally and internationally as a noted museum leader and scholar and an accomplished leader in the field of the visual arts, has been named president and CEO of the J. Paul Getty Trust. Dr. Cuno, who comes to the Getty after serving as president and Eloise W. Martin Director of the Art Institute of Chicago since 2004, will assume his position August 1.
Prior to directing the Art Institute of Chicago, one of the world's leading encyclopedic art museums, where in 2009 he presided over the opening of the museum's Modern Wing, Dr. Cuno was the director and professor of the Courtauld Institute of Art, University of London, from 2003-2004; the Elizabeth and John Moors Cabot Director of the Harvard University Art Museums and professor of the history of art and architecture at Harvard from 1991 to 2003; director of the Hood Museum of Art, Dartmouth College, from 1989-1991; director of the Grunwald Center for the Graphic Arts, UCLA, from 1986-1989; and assistant professor of art, Vassar College, from 1983-1986. 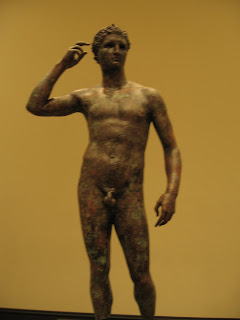 There are many tasks involved in this new position of course, but the one I'll be closely watching will be how this will impact the Getty's ongoing dispute with Italy over this ancient bronze.
(via)
Posted by Unknown at 12:11 PM

Email ThisBlogThis!Share to TwitterShare to FacebookShare to Pinterest
Labels: "Bronze Statue of a Victorious Youth", internationalism, The Getty