Viking Silver Discovered by Metal Detectorists on Display in York

This hoard of viking silver -- buried in the 10th century -- was discovered by Metal detector David Whelan and his son Andrew in a field in 2007.  Included in the find were 617 coins and 67 other objects.  The treasure was valued at over £1m.  They went on public display in York last week.  Andrew Morrison, curator of archaeology at the York Museums Trust tells the BBC what we know about the silver and the role it played in the Anglo-Scandinavian economy:

"We can certainly say it's an Anglo-Scandinavian hoard because of the contents," Mr Morrison insists. Among the coins are dirhams from Muslim states as far away as central Asia and Afghanistan.  "What they're showing you is trading links. That tends to be very much more the Viking side of life than the Anglo-Saxon side of life," says Mr Morrison. The Scandinavian seagoing peoples travelled and traded far and wide   The presence of "hack silver" - items such as jewellery cut into pieces for their silver value - is also "what you expect from an Anglo-Scandinavian economy," he adds. The Anglo-Saxons tended to use coins rather than bullion.  The hoard will be on show in York from 17 September until 1 November.  It will return to the British Museum while the Yorkshire Museum closes for refurbishment until August 2010. It will then return to York for "a period of time" - by which time the whole hoard, including all 617 coins, should be ready to go on display.  For Mr Morrison this co-operation between regional and national museums is "the way forward - you get the best of everything: the local input into ways of doing things, with the national expertise".  The hoard, for him, has a personal feel - it gives clues about whoever it was who hid it. The single gold arm ring among the mass of silver items could well have been of great sentimental value to its owner, he believes. Possibly it was a reward for services given by a superior ruler.  In sum, he says: "This is the lifetime's treasure of a reasonably wealthy individual."  It also helps us to remember what a wealthy and prestigious place Northumbria, centred on York, was, he observes - sometimes in the richness of archaeological finds in the city and its surroundings "we forget how it is a place with the seeds of power and glory." 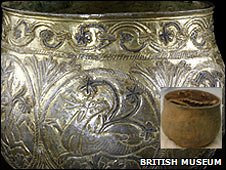 In an ideal world of course all these objects would be professionally excavated.  Yet these objects tell us a great deal about the culture which produced them, they can be enjoyed by scholars and the public in York and at the British Museum.  Contrast this with the Sevso Treasure, which is locked away at Bonham's auction house.  Three nations of origin, each with national ownership declarations and no similar rewards for finders, fought over those works, and the result was the trust created by the Marquess of Northampton was able to retain possession.  Whatever criticisms can be lodged with the Treasure Act and the Portable Antiquities Scheme, they reward compliance.  They work.  We still know very little about the Sevso Treasure, who discovered, and where.  The current state of law and policy produces a perfect black market.  The PAS offers a good alternative.  What is the utility of a legal regime which cannot be enforced?

I've argued that the PAS has a lot of merit, and should be considered as a potential policy model for other nations. Rick Witschonke, reported on a conference earlier this month at the British Museum on the Portable Antiquities Scheme, and his thoughts are here.