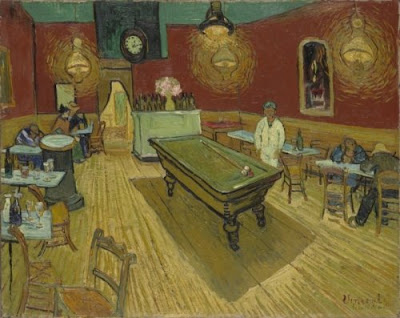 Yale University has been sued in U.S. District Court in Connecticut by Pierre Konowaloff who alleges a work by Van Gogh—"The Night Cafe"—was confiscated from his great-grandfather during the Communist revolution in Russia.

The action is a counter to Yale's earlier suit. Yale initially brought suit in March, seeking to pre-empt Konowaloff's claim.  In Yale's initial suit in March, they argued courts should not undo the property revolution of Russia.  Russian law would seem to prevent these kind of claims as well. Back in March, Richard Lacayo noted that Konowalof's grandfather—Ivan Morozov was "was one of the two outstanding Russian collectors and patrons of modern art early in the 20th century." The suit, Yale University v. Konowaloff, 09-466, U.S. District Court, District of Connecticut (New Haven), will determine whether this work was seized unlawfully during a Communist takeover of Russia in 1918.

A similar issue recently arose in the UK with the recent dispute over the Royal Academy display of "From Russia: French and Russian Master Paintings 1870-1925 From Moscow and St. Petersburg". Russia nearly backed out of the deal.  The display required an act of Parliament to grant special immunity to prevent the works from being claimed by descendants of the original owners from whom many of the works were summarily seized during the Bolshevik revolution.

2009 must be the year claimants to Yale's cultural heritage decided to pursue their claims, because of course this suit follows soon after the Republic of Peru's suit filed in December over artifacts taken from Machu Picchu.
Posted by Unknown at 5:29 AM

Whatever the circumstances are.... I heard that a big number of students attend Yale... if it effects them.... it's a big concern!