My Article on Conflict of Laws and Cultural Property 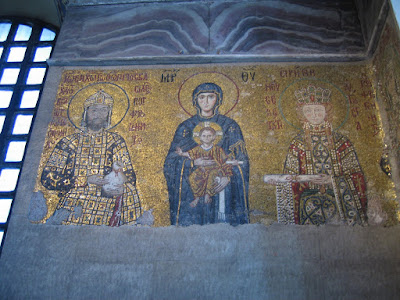 I have posted on SSRN the final version of my paper titled How Adopting the Lex Originis Rule Can Impede the Flow of Illicit Cultural Property, 32 Columbia Journal of Law and the Arts 111.

Pictured here is a Byzantine mosaic from the Hagia Sophia in Istanbul, similar to the mosaics taken from Northern Cyprus which gave rise to the Goldberg suit. The Seventh Circuit Federal Court of Appeals upheld the default—and problematic for cultural property disputes—lex situs rule in holding “Indiana law and rules govern every aspect of this action, from the statute of limitations issues through the application of the substantive law of replevin.” The trial court had noted that although Switzerland was the location of the wrongful activity, it bore little connection to the cause of action. None of the parties or important actors was Swiss; the mosaics had never been in the stream of commerce in Switzerland; and they had only been on Swiss soil for four days. The jurisdiction with the closest connection to the objects was Cyprus, not Indiana. After all, the mosaics had been firmly fixed to the church for over 1400 years. Although it would therefore make sense to give concessions in the law to jurisdictions such as Cyprus, courts have shown a hesitancy to apply the law of the source nation, or lex originis.

Here is the abstract:

The International trade and transfer of art and antiquities faces problems because nations have erected very different rules with respect to movable property. All nations forbid theft, however most cultural property disputes involve an original owner and a subsequent good faith possessor. Different jurisdictions have chosen to allocate rights and responsibilities between these two relative innocents in very different ways. Disharmony in the law is seldom a good thing, but in the realm of cultural property it can be particularly damaging to the interests of nations, museums, individuals, and our collective cultural heritage. The lack of harmony ensures no overarching policy choices will be furthered, which prevents parties from anticipating legal outcomes and giving substance to policies.

This article explores the default conflict of law rules which are applied to cultural property, and shows how the lex situs rule exploits the various legal rules which apply to art and antiquities. It challenges the lofty position enjoyed by the lex situs rule and proposes a radical reform of the default choice of law analysis. By employing the law of the Nation of Origin or lex originis courts can ensure the jurisdiction with the most tangible connection to an object enjoys the benefit of applying its legal rules to a given dispute. This will not only ensure the security of art and antiquities transactions, but impart much-needed transparency into the cultural property trade, and finally will decrease the theft and illegal excavation of art and antiquities.

The article begins by presenting some examples of recent disputes, and the problems they present for the law and cultural heritage policy. Section II describes the fundamental difficulty of adjudicating claims between two relative innocents, and the disharmony which has resulted as different jurisdictions have resolved this conundrum in very different ways. Section III lays out the ways in which private international law impacts art and antiquities disputes. Section IV analyzes the 1995 UNIDROIT Convention, the most recent attempt to harmonize the law affecting cultural property. Section V proposes a radical reform of the choice of law enquiry taken by courts.

I'm not sure where this post belongs, but I have a question about Pre-Columbian pottery shards. I found thousands of small pottery shards on my daily walks on a beach in Nicaragua. A local museum curator told me that I could bring the pottery shards back to the USA. I had no problems in returning to the states with my shards. Now, I want to make wire wrapped pendant necklaces with the shards and use the proceeds for a Nicaraguan college scholarship fund. The shards are dated 800-1200 AD. Is this legal? How can I find out?