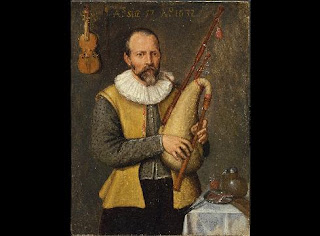 Immigrations and Customs Enforcement Agents seized this work by an "unknown Utrecht master" dating from 1632. It will be returned to the Max Stern estate. In a piece by Catherine Hickley for Bloomberg, it is reported that the work was seized from Larry Steigrad on April 2nd.

The precedent for the seizure was set late last year by the First Circuit Federal Court of Appeals in Vineberg v. Bissonnette. It affirmed summary judgment for successors of an art dealer—Max Stern who was forced into selling works under the Nazi regime. The sale took place at a 1937 auction; the First Circuit held in that case that the forced sales of works belonging to the Stern estate were a "de facto conficcation", providing the precedent for this seizure.

Thomas Kline, an attorney for the Stern estate is quoted in the piece "With that decision, all artworks Stern sold under orders at the Lempertz sale are now considered stolen property, [and the estate] “hopes to receive further assistance from law enforcement authorities in the U.S. and elsewhere".

Lawrence Steigrad, the owner of the gallery in Manhattan where the work was seized says in the piece "“I was in my warehouse in New Jersey when Philip Mould [the London dealer who sold him the work] called me on my cell phone . . . I was shocked and upset that we had not found out before we purchased this painting, as we both had it checked. We were both happy that I had not sold it on, causing more problems and involving private clients.” It seems a bit curious perhaps that this call came only a couple of days before an undercover agent walked into the gallery to look at the work.

“I was in my warehouse in New Jersey when Philip Mould called me on my cell phone,” Steigrad said in an e-mailed response to written questions. “I was shocked and upset that we had not found out before we purchased this painting, as we both had it checked. We were both happy that I had not sold it on, causing more problems and involving private clients.”

The London dealer Philip Mould purchased the work at the Kunsthaus Lempertz auction house in November 2007; the same auction house which sold Stern's works 70 years earlier. That auction house blames the Art Loss Register for "missing" this work. Luisa Loringhoven describes how this work was not caught by the company's database:

Loringhoven said London-based Art Loss Register carries out about 300,000 searches a year. “While we endeavor to be as thorough and as accurate as possible, we may miss a handful of items”.

It seems then Mould is left footing the bill for this restitution at present; though he may choose to proceed perhaps against the Kunsthaus Lempertz or even the art loss register based on the details in the piece. The Department of Justice and Homeland Security will return the work to the Max Stern Estate today in a ceremony in New York today which is also Holocaust Remembrance Day.
Posted by Unknown at 9:38 AM