The Cleveland Museum of Art (CMA) and the Italian Culture Ministry announced today an agreement which will return 14 objects to Italy in exchange for loans of "a similar number of works of equal aesthetic and historical significance". The loans will be for a "renewable" 25-year period. The objects are going back to Italy because they have been looted, stolen or illegally exported.

David Gill has compiled a list of the objects, and provided links to their description on the CMA website. 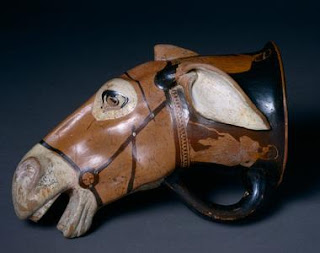 The announcement is not really a surprise. The former Culture Minister, Francesco Rutelli, had hinted at this deal for months. The deal is the result of a "friendly and collaborative 18-month negotiation" as reported by Steven Litt, the Cleveland Plain Dealer Art Critic. That's the way both sides are describing the negotiations. Timothy Rub, director of the CMA told Litt "I think it's always difficult when adverse claims are made against an object or objects in a museum's collection, but the most important thing to do is to first of all determine if these claims have any merit, and if they do, to deal with them as transparently and as thoroughly as possible. This has been a very open and thoughtful discussion."

Likewise, Maurizio Fiorilli, said "The director is an exquisite person, this was a negotiation among gentlemen. They always collaborated and exhibited great openness, therefore, I am content." High praise indeed.

The crucial point to pick up on here is these objects were connected with Giacomo de Medici, which Italian and Swiss authorities raided in 1995. The polaroids they seized are the engine driving nearly all of these repatriations. Without that solid evidence, the chances are that these objects would not be returned. The restitution of these works is a positive developmetn to be sure, but will they continue? Has the antiquities trade learned its lesson? What about institutions who want to make further acquisitions? Are further acquisitions possible? Can we be sure they are legally excavated? Are the fundamental legal mechanics of the purchase and sale of antiquities different now than they were in the 70s, 80s and 90s? I don't think so. The underlying problems persist, though at least public perception has changed markedly. On that front, perhaps judges will be more inclined to adopt more encompassing views of the foundational international legal agreements such as the 1970 UNESCO Convention, but the antiquities trade can still effectively evade legal safeguards. 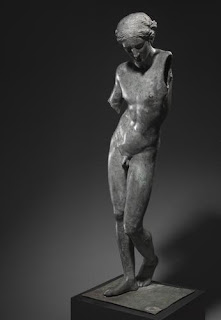 To see how let's contrast these returns with the CMA's recently-acquired bronze Apollo, pictured here. Not being an art historian nor an archaeologist, I still think this Apollo is a much more interesting and valuable antiquity than most of the objects being returned. In fact it is slated to be the centerpiece of the CMA's renovated classical exhibition. Litt reported today that there will be a joint scientific study of the statute which was acquired by the museum in 2004. The Apollo was the subject of another article by Litt in the Plain Dealer back in February. Evidence suggests the sculpture has been excavated for perhaps 100 years, though Italy has argued it was salvaged from the Adriatic in the 1990s and then illegally sold. The publicly-released provenance of the object seems a bit suspect. Its recent history stems from Ernst-Ulrich Walter, a retired German lawyer who said he foudn the statue lying in pieces when he recovered his family's estate in the former East Germany.

It was then sold to a Dutch art dealer (Michael van Rijn perhaps?), then sold to the Phoenix Ancient art gallery. We have no idea where or how this stunning statue was found. There is no contextual information. Was it really in pieces for 100 years? The discussion and feeling from the CMA and Italy definitely don't seem to indicate there will be a much in the way of a continued dispute over the object. And that's because there is no evidence it was stolen, looted or illegally exported. Rather, there exists a paucity of information about its origins. That is not enough to base a legal claim.
Posted by Unknown at 3:27 PM

For further comments on the Cleveland return see here. For the Apollo and a discussion of its reported "history" see here.

You say, "these objects were connected with Giacomo de Medici". But do we know this for sure? (Litt's piece implies it.) We know the names of some of the donors (though some are suggestive) but not the identities of the galleries and dealers. While it is likely that some of these pieces were identified by Polaroids from the Medici archive we need to remember that this is not the only source for such identifications. Cleveland Museum of Art could help the "due diligence" process by publishing the histories of the returning pieces - just as the MFA Boston and the Getty did for theirs.

Anonymous said...
This comment has been removed by a blog administrator.
9:58 PM